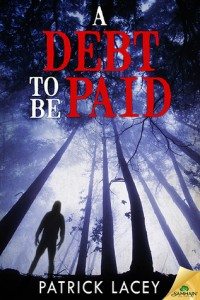 Patrick Lacey’s new novella A Debt To Be Paid is a compelling page-turner that manages to be be a thrilling horror story and interesting exploration of mental illness. The story follows Meg Foster, a woman who was kidnapped by her schizophrenic mother when she was young, and exposed to the terrifying effects of profound mental illness. As Meg ages out of her teens and college years she is forced to face the fact that she may have the same illness as her mother, or that there could be something even more sinister happening.

Meg Foster is estranged from her mother and has a relationship that is distant at best with her father. She’s moved to a new town and taken a new job in an attempt to distance herself from the past, but can’t entirely forget it thanks to a scar on her forehead she always rubs in times of stress. It’s a stark reminder of the night her mother’s mental illness came to a terrifying climax and resulted in her unintentional wounding. As she nears the age her mother was when her mental illness became overwhelming, Meg begins to notice things that scare her. Things that remind her of what her mother believed she saw and heard as her health deteriorated.

Meg is a complex character, balancing the demands of her average life as a bank teller with too many bills and impending student loan payments. In her attempt to forge a life of her own away from her parents she relocates to a small town where she has no history and doesn’t know anyone. A random night drinking cheap beer at a bar leads her to meet Brian Peterson, a life long local. Meg unloads on Brian and thinks she has alienated him, but when fear and fate drives her, coincidentally, to the door of his bookstore, she discovers that they have a connection.

With Brian at her side, Meg must confront the possibility that she is following in her mother’s footsteps down the road of schizophrenia. She also must answer the seemingly impossible question of what she saw when she was a child, during her mother’s break from reality, and what it means if she’s seeing these things again. Is it possible that schizophrenia is not the root cause of the problems of mother and daughter.

As someone who has experience of working with individuals diagnosed with schizophrenia I found Lacey’s depiction of the illness and those living with it and around it to be not only accurate, but sympathetic and humane. He does an admirable job of balancing the serious nature of the disease with the task of telling a great horror story. A Debt To Be Paid is a great work of fiction that leaves the reader with only one objection: that it had to end.