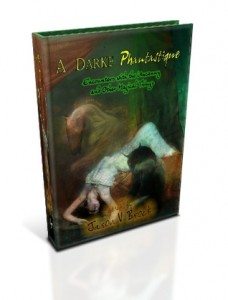 At 728 pages, it would seem that Jason Brock’s anthology, A Darke Phantastique, has the thickness, the length, and the physical weight to qualify for instant tome-dom; at the least, it meets the size requirements to be categorized with long, heavy, densely academic-looking, dry-as-dust, antiquated volumes that no one ever willingly picks up.

Except that in this instance, size is the least of the characteristics that immediately strikes readers. No one seeing the richly evocative cover by Samuel Araya, then opening the book at random to be greeted by page after page of stunning interior artwork, will ever shrug A Darke Phntastique aside as a tome. Even before reading any of the stories (including a television script and a number of poems), readers will note that the illustrations on almost every page and the highly creative use of margins and print overlays throughout do more than illustrate—they illuminate, both in the sense of widening and deepening the stories themselves and in the sense of creating a seamless blend of verbal and visual that has its beginnings in Medieval illuminated manuscripts. That many of the pieces are manipulated photographs, blending modern technique with ancient effect, only serves to make the experience more remarkable. In spite of these excellences, however, A Dark Phantastique is not a coffee-table art book; the art serves to highlight stories, many already remarkable in their own right.

The title and the subtitle are crucial to understanding what the book contains. It is about the “darke phantastique”—both words suggesting, with the art inside, an awareness of past traditions. The additional –e on the first throws the phrase back several centuries to late Medievel, Renaissance, and early Modern English. Phantastique is an archaic form of fantastic, stemming from a time when the word referred more directly than now to things grotesque or bizarre, when fancy was a pejorative. As with the other elements already considered, the words suggest a collision between past and present, between staid literary traditions and stories that determinedly expand, undermine, and re-define those traditions.

The subtitle provides even more information: “Encounters with the Uncanny and Other Magical Things.” Here is where the anthology differentiates from more narrowly conceived collations of horror, science fiction, or fantasy. In the 1970s, Tzvetan Todorov defined the fantastic using structural principals. During its telling, a story may hesitate between the “fantastic uncanny,” in which events seem impossible within the confines of the world as we know it; and the “fantastic marvelous,” in which events can ultimately be traced to possibilities within the real world. For the duration of that hesitation, readers are in the realm of fantasy; once readers decide that the events either are possible, or are not possible, the story shifts to the uncanny (unknown) and depends upon supernatural or inexplicable causations; or to the marvelous (wondrous or surprising) and depends upon a reexamination of physical laws.

Taken together, the title of this book warns readers that what follows will be grotesqueries of the darker sort, stories that will be unsettling, discomforting, frightening, even perhaps horrifying. And the subtitle shifts and clarifies that intention: the stories will be mysterious, enigmatic, baffling, and bizarre. They will be, in a word, magical.

The overall tone of the anthology is introduced in a 1951 essay by Ray Bradbury on “The Beginnings of Imagination,” followed by Jason V. Brock’s “An Abiding Darkness, A Phantastique Light,” a fairly lengthy discussion of what readers might expect. The bulk of the book  divides into thematic sections: “Magical Realities,” “Lost Innocence,” “Forbidden Knowledge,” “Hidden Truths,” and “Uncanny Encounters”—each focusing on an element of the book’s title and subtitle while at the same time using wording that implies both tradition and innovation.

Of course, all of this is just prefatory to the most important constituent: more than fifty stories, poems, and (one) teleplay. That is where the true magic reveals itself, whether in a relatively direct ghost story like Joe R. Lansdale’s “The Case of the Four-Acre Haunt”; a shorter, highly metaphorical tale about monsters, strangers, perceptions, and revenge, such as Paul Kane’s “Michael the Monster,” in which Halloween takes on a new significance; a horrific transformation of a childhood tale in William F. Nolan’s “The Last Witch”; or symbolic pieces that border on (and occasionally cross into) surrealism, such as Nathaniel Lee’s “The Wisest Stone and the Zoo” and Derek Künsken’s “The Buddha Circus.” Some are short permutations on expectation, as in E.E. King’s “Three Fables”; others are extended experiments in language and form that expand the definition of narrative and story, including Jason Maurer’s “’In Your Dark’: Differing Strategies in Subhuman Integration Through Monster Academies” and S.T. Joshi’s “You’ll Reach There in Time.”

For anyone interested in the potentials for wedding traditional motifs to current social concerns, the sheer range of themes is inviting. Several stories deal with sexuality, from rigidly defined to subtly (and not so subtly) evolving—as well as sexual expression ranging from homosexuality to transsexuality to incest. A number of stories embody the empowerment of women; others deal with subtle difficulties inherent in religious belief, in the whole issue of diversity, in something as apparently direct as vegetarianism.

This is one of those few anthologies that captures the pulse of its time. The first time I came across such a book, it was definitely a tome—1080 pages long, a thick, grey-bound book with no dust jacket, with no illustrations at all, dusty from sitting on a shelf in a used-book store for who-knew-how-long. The volume was copyrighted 1944; I bought it in about 1968 for—as I recall—one dollar…fairly big money for a poor student back then. I opened it…and was both transformed and transported.

Reading Great Tales of Terror and the Supernatural, edited by Herbert A. Wise and Phyllis Fraser, introduced me to what horror could accomplish as well as to seminal stories from the finest practitioners of the late nineteenth and early twentieth centuries. I don’t know how many times I’ve dipped into that book over the decades; I’m rather surprised that it has held up as well as it has. But I wouldn’t trade it for anything—at least in terms of being able to trace the genesis of my engagement with things dark and frightening.

I can easily imagine new generations of readers opening A Darke Phantastique: Encounters with the Uncanny and Other Magical Things, becoming entranced initially by the artistry of the book, then progressing into the stories themselves and discovering new ways of looking at a new century of darkness…and new tales to explore it.