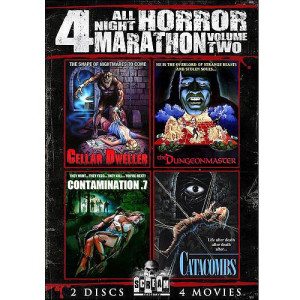 Scream Factory’s first volume of this four movies per collection series was only so-so at best. Is their second time any better than their previous effort? Well grab the popcorn, we’ve got four more blasts from the past to get through this night.

First and foremost for me is the outrageously 80s anthology, The Dungeonmaster. This slice of cheesy 1984 goodness is about a man armed with the power of science and computers (oooohhhhh, aaaaahhhhh) in a life or death battle with an ageless, evil wizard for the hand of his girlfriend. In order to win back his lady love, our hero must overcome a series of trials, each one weirder than the last. With each segment written and directed by someone else, the overall movie has a bit of a schizophrenic feel to it, but it sure is a lot of fun. That is, if your idea of fun is watching a nerdy guy do battle with the forces of evil personified by creepy muppets, Ray Harryhausen-like stop motion monsters, rejects from The Road Warrior movie, and even the 80s metal band W.A.S.P. (no, really). If so then this flick alone is worth the meager price Scream Factory is asking for the DVD.

Next in order of what I like is the 1988 John Carl Buechler directed Cellar Dweller. In this monster-tastic movie, a comic book artist in the 1930s draws a demonic looking baddie that comes alive and kills him. Many years later a new cartoonist moves into the same old house and revives the beastie that now resides in the titular cellar. Havoc and hilarity ensue. That’s basically all there is to this one, it’s a creature feature with a memorable looking monster and while it’s nothing revolutionary, it’s enjoyable.

Contamination .7 (AKA Creepers) from 1993 is next, and sadly it’s nowhere near as enjoyable as Cellar Dweller. It’s an eco-terror tale about a greedy nuclear power plant manager dumping radioactive waste in a forest. Naturally this creates some bloodthirsty tree monsters that start terrorizing a small town. A group of townsfolk comes together to fight the evil, creeping, tree roots and yes, the baddies in this one are killer tree roots. Mostly stupid, a little bit fun, I have seen worse, but I’ve also seen much better.

The last of this quartet is Catacombs. Now this one has an odd history. It was finished in 1988, but not released until 1993 under the tile: Curse IV: The Ultimate Sacrifice, despite it having nothing at all to do with that series of films. In this one a demon is trapped underneath a monastery for over 400 years.  Then an American priest and a pretty young teacher come together to fight the forces of darkness as they once again begin to stir. This one can be a bit of a drag at times, and there’s very little blood to keep the gorehouds happy, or any real frights for that matter. It firmly falls into the OK camp.

As with the previous 4 movie horror marathon, there are no special features or extras here, but just having these rare and mostly forgotten films on DVD is good enough for serious horrorhead collectors. So if that sounds like you, give this 4-pack a buy. You can get it for dirt cheap and that, combined with the strength of two of these movies, means I can give it a recommendation.