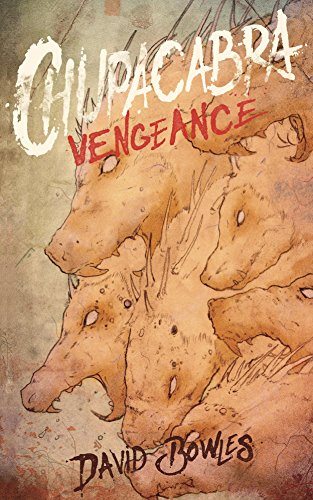 Talking about the writing of author David Bowles is always a pleasure, mostly because it means I get to read his books, which are a joy every time. But also, because his stories are conversation worthy, deserving of attention and, if you’re that way inclined, a deeper study than the average tale in any given collection or anthology. In addition to the fact that his work is never less than entertaining, there’s always a deeper meaning to his words than just the story you see on the surface of things. Bowles has a unique mind and it shows clearly on the page, seared into his narrative and laid bare for us to laugh or rail or cry at, possibly never more so than in Chupacabra Vengeance, his latest collection from Broken River Books.

When I first started reading Chupacabra Vengeance I started, as most people would, reading from the beginning, consuming the stories in the order they appeared in the book. And there’s nothing wrong with that. No matter what sequence you choose to read these stories, they are all standalone works, immensely enjoyable in and of themselves. But after I had read the first two stories, I was talking to the author about the book and he pointed me to an article he wrote on the Broken River Books website that recommends a different arrangement, one that he thought might be more enjoyable as some of them run in chronological order and they are interconnected, introducing recurring characters and/or threads that run between what boils down to three sets of tales interwoven with each other and adhering to a certain “universe” as David Bowles puts it.

The first set of stories that Bowles refers to, Legendarium Tales, contains nine narratives that follow a course of mythology, religion, and magic realism spanning the years between 1495 and 2016. As soon as you read the first story in this series, “The Luminous,” you’ll see what I mean when I refer to the author as a Mexican-American Grimm Brother. It’s a dark and lyrical tale that tells of Achitomal, a merchant spy on a mission to supposedly establish trade with the people of a distant village. As events unfold, he finds himself on a quest to save the world from a sorceress bent on unleashing unimaginable mayhem upon the world. Bowles’ voice is entirely his own, liquid and captivating, drawing his readers in and enchanting them with his hypnotic style.

From here, the stories in this set move quickly forward in time, progressing through “Jealous Spirits, Thundering Gun,” a story that is at once sorrowful, exciting, and hopeful, laced through with threads of loss, a mother’s suffering, and bloody redemption delivered from the barrel of a magic gun. It’s here that we first meet Philip Kindred, a troubled man, haunted by his past and suffering from survivor guilt:

“Dropping deeply into the story, he immediately identified with Dante, a man adrift, purposeless at the midpoint of his life. Then chosen. Set upon a road he would never have elected of his own free will. Just as I was. But the hellish visions in the medieval parable paled beside the horrors Kindred had witnessed during his struggle, more than seven years spent fighting twisted agents of darkness.”

It’s also here that we learn of Bowles tendency to weave subtle parables through his stories, creating works that are both entertaining and thought provoking. I won’t tell you what the message is here, as the act of discovery is part of the experience, but I will say that you’re likely to find something to think about and dwell on in damn near every story in the book.

Also in that sequence of stories is what is possibly my favorite piece that Bowles’ has ever written, The Bones of Rio Rico, in which we find the ineffable and stoic Donna Hooks, The Pale Witch, caught up in an attempt to find and rescue a young woman’s stolen son. Donna is a recurring character and one of my very favorite things about the whole collection. She’s a perfectly well formed, tough-as-nails witch, dangerous as hell but softhearted as a kitten, never able to turn her back on those in need of saving:

‘Her words loosened the knot in my heart. I laid my cheek atop her head, bending into her embrace. “I hear you, wise one. I have been selfish, not wanting to risk pain. But … very well. I accept the charge placed upon me. If the boy is still alive, I will be his champion. However, I will not seek revenge if he is dead. Others will have to enact justice.”’

In Donna, you’ll find what is exemplary of this entire book. While there’s plenty of horror and violence, and even some sci-fi and fantasy, you can’t help but notice the human element in every single story. No matter how outlandish or fantastic Bowles’ premise might be at any given time, his stories are always, at their hearts, about the people.

Moving throughout space and time, Bowles constructs his narratives with an often dark, but sometimes almost playful literary voice, giving us an eclectic mixture of scenarios, from the creeping, mystical and frequently terrifying stories of The Legendarium tales to the bleak far-future Ice Age Sci-Fi universe, in which we learn that Bowles is a master of plot advancing, character-driven action with stories like the frantic “Undocumented,” a story of a young man in a desperate race against time, the elements, and the evils that men can do. Like a lot of Bowles stories, it’s a largely introspective work with little hooks throughout to keep the reader engaged:

“Over the next hour I have to duck down three times. On the third, the ’droide slaloms so close it could touch me. I almost throw up what little rations I’ve been able to eat. Inside my suit, I’m sweating like freaking crazy.

But in the end, it isn’t the robots that nearly kill me.”

David Bowles is a consummate wordsmith with an authorial voice that lures his readers in, lulling them into a near complacence with his natural and masterful use of language. But take a breath while you can because the lull doesn’t last long in any of these stories. Just as you settle in and begin to get comfortable with these sometimes lilting, almost lyrical tales, they explode into incendiary, in your face action and violence, driven hard and fast by character interaction, colorful dialogue, and descriptive prowess.

What you have in Chupacabra Vengeance is an incomparable work of art. Bowles has a unique and beautiful mind that he spills out in full color glory on the pages of this book built out of dark, literary masterpieces. The stories read like fairy tale nightmares, at turns dark and terrifying, sometimes very sad, sometimes lighthearted and playful, rarely happy but always hopeful, cerebral, very human tales that stay with the reader long after they’ve closed the book. Every single tale in this collection is a gem in Bowles’ lexicon, and, as a whole they make up something that is both bleak and beautiful. If you haven’t read his work yet, this book is a perfect sampling of his style and his brand of fiction, a brand that defies categorization at every turn.