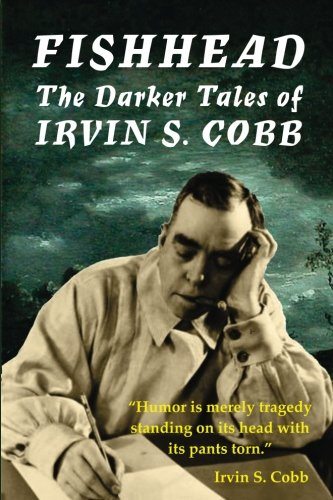 Irvin S. Cobb (1876-1944) was a famous American journalist , a successful humorist (and occasional actor). In addition, he also penned a cluster of dark stories, ranging from horror to crime, that are now assembled for the first time in one volume by British imprint Parallel Universe.

The book, an elegant trade paperback, includes fourteen tales where Cobb’s darker side is effectively and finally shown. All in all, the collection is one of the most enjoyable I have read in a long time. Cobb was an excellent writer, able to handle with exceptional skill even complex plots and to draw credible, well-crafted characters in just a few words.

To pinpoint the best stories in the volume may be a bit difficult, but, in my opinion, the more remarkable tales are the following:

“Fishhead” (known to have inspired Lovecraft’s “Shadow Over Innsmouth”) is a strong, unforgettable horrific tale, while “The Unbroken Chain” is an offbeat whodunit that tracks down the racial origin of a lonely, elderly gentleman. “The Gallowsmith” vividly portrays a famous hangman and his untimely death due to an unusual incident in his previously immaculate career. “The Escape of Mr Trimm” is a suspenseful piece with a movie-like quality, where a man bound to jail survives a train crash and starts a long and difficult escape toward freedom. A similar atmosphere permeates the superb “Queer Creek,” an enticing western where the only survivor of a bank robbery w andering alone in search of a final escape, meets a mocking destiny.

For those readers who love tasty, dark fiction, Fishhead is not only an unexpected surprise, but a veritable feast to savor page after page. Warmly recommended.