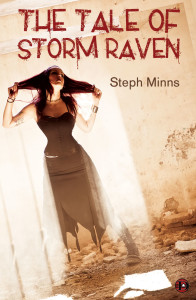 In a world where online dating can be more frightening than any horror movie, Nick thinks he’s met the perfect match. Suzy is the Goth girl of his dreams: beautiful, intelligent, ambitious, mannered. But Suzy has a secret, and as her behavior becomes increasingly erratic, she reveals that a ghost that has taken over her body.

The Tale of Storm Raven approaches the typical ghost story in a way that I have not yet seen: possession in the form of a wig. The premise itself is intriguing, but Storm Raven’s tale wants a bit more development. The piece is short, —a scant twenty-nine pages— and I felt myself wanting more dialogue between Nick and Suzy, more development of their relationship. Their first meeting is a blur and very quickly proceeds to more intimate interactions. There is room here for a novel length tale. As a result, Nick and Suzy feel a bit one-dimensional at the beginning.

Once Suzy’s possession begins, however, the pace accelerates, and there are moments of suspension, moments between dark and light where strange things shift forms from human to something altogether not. There is some deft writing throughout, and Nick’s investigation into exactly what is haunting Suzy reveals that the writer knows her craft. Unfortunately, the final showdown between Nick, a Pagan believing aid, and the spirit is somewhat anti-climactic. I realize that not every exorcism must be violent, but the scene almost felt as if the men had not quite done their job, and that the spirit would return, lurking on the periphery of nightmare.

In the end, however, I wanted more. More characterization, more development, more conflict. There’s raw potential here. For those readers who enjoy Japanese horror or have watched Ringu more times than they can count, The Tale of Storm Raven will prove an enjoyable read.