Once Upon a Time in Hell – Book Review 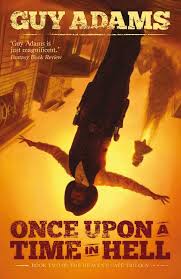 Book two of The Heaven’s Gate Trilogy. A weird western, a gun-toting, cigarrillo-chewing fantasy built from hangman’s rope and spent bullets. The west has never been wilder. A Steampunk-Western-Fantasy from Guy Adams.

“Heaven? Hell? There’s no difference. Angels, demons, we’re all a bit of both. This could be the most wondrous place you ever experience or so terrifying it makes you pray for death. Not that death would help you of course, there’s no escape from here…”

Wormwood has appeared and for twenty four hours the gateway to the afterlife is wide open. But just because a door is open doesn’t mean you should step through it…

Those who have traveled to reach the town are realizing that the challenges they’ve already faced were nothing compared to what lies ahead. The afterlife has an agenda of its own and with scheming on both sides of reality, the revelations to come may change the world forever.

I volunteered to read this knowing it was the second book in a trilogy, I hoped it would stand alone as a novel and ignite an interest in the first book and an excitement for the third. The atmosphere is tangible and the characters, though strangers to me, are well formed and I am curious to know about the beginning of their journey. After reading a few chapters of the second book with no knowledge of what has led to these events I find myself feeling completely lost. I don’t know who these characters are or what their motivation for this journey was since it seems to pick up where the first book left off. Still, I read but the frequent shifts in viewpoint are confusing and make it hard to keep track of who is who and who is where and who I’m following at any given time. If you’ve read and enjoyed the first book you’ll probably enjoy this installment. If you haven’t read the first one but are interested in something that combines the wildness of a western and a sense of suspense, you’ll want to pick them both up, I plan to.