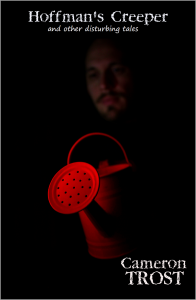 For a few years now I’ve been watching Australia’s Cameron Trost – from his humble beginnings publishing with Midnight Echo, to his shorter novel Letterbox, and finally acting as midwife and editor-in-chief to Black Beacon Books, an independent publishing venture specializing in mystery, suspense, psychological horror, and the just plain weird. In short, all the niches we’re here to promote. Though still in a stage of infancy, the small press is already showing the hallmarks of professionalism by working with a gifted team that includes Greg Chapman (whom I’m sure some of you met at the recent WHC), David Schembri, and Sandra Fowke. With Hoffman’s Creeper, Cameron gives us all the stories that have led him to this point – an imaginative chart showcasing his broader influences while at the same time giving rise to his own unique voice.  Here is a snippet of some:

One of the collections openers is probably its strongest, the tale of a small cadre of female school students who – in order to gain power – turn to thaumaturgy and establish a coven. It’s one that contains an amiable twist, with a side of perversion. Foremost, it establishes Trost’s writing style: a fair heaping of dialogue with subtle mystery in the background like far-off radio noise.

A kind of reverse-coin approach to mental-illness. Eric Sanderson, while taking the walk home along the path past Kangaroo Point, encounters another man in the act of suicide meditation. With nicely crafted characterization, this is somewhat evocative of King’s tale The Last Rung on the Ladder. Here Cameron is weaving the human into horror.

The title tale is also one of the more memorable … the story of Professor Samuel Hoffman – a professional botanist whose adoration of the plant realm will see him adopt some eccentric (and macabre), practices. Though one could call this a more staid take on Little Shop of Horrors, I found something morehere: a perspective of the world that views other species (in this case plant life), humanity’s equal if not better. In the real world it’s a science we are only now beginning to penetrate – just how conscious is the green world that surrounds us?

So … what can we take away from this collection? As a working whole, the stories presented are light dark fiction (some, I have to say, bordering on Young Adult). Though Cameron knows how to construct a clean and workable sentence, the subtle horror on show provoked – at times – a casual response from this reviewer. A positive method Cameron employs is a kind of failsafe twist (usually within the closing paragraphs) designed to rock readers perceptions of what came before. It’s a token technique – one that other writers aspire to but which Trost seems to have diligently mastered. In regards to style and technique, the author utilizes a generous helping of metaphor to already proficient ideas, and I anticipate it’s a voice that will only improve with time.

With any debut collection there will be novice drawbacks (things like show, don’t tell), but for the most part Trost has put down some solid groundwork for future endeavours. I, for one, am looking forward to a full-length novel from this promising talent.