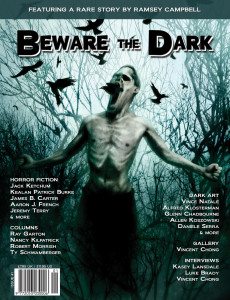 Beware the Dark Issue 1: Vampire Unlimited features an interesting bunch of authors, a couple of whom we know and have admired for a while. And as this magazine is in its infancy, it looks as though it will be a success due to the famous authors it has working on it. Renowned author Ramsey Campbell has a short story, “Potential,” featured in it to show how it has even captured the minds of the best in the business. “Potential” was originally published in Demons by Daylight by Arkham House in 1973, and doesn’t suffer as a reprint as he is viewed by most to be one of the most influential horror writers living today. The stories have different themes including being stuck in a rut when young and having to face staying with a parent who isn’t liked, how having one too many affairs can catch up with you, domestic violence happening next door with the thought of what to do if something bad occurred,  and for twins being born on Halloween. “To Turn a Blind Eye,” by Jeremy Terry is one of the best in there besides “Potential.” If this is what Beware the Dark Issue 1 is offering at the moment, it will be a real treat to see what they have in store for readers in their second issue.

The cover art is enough to scare those of a nervous disposition through its Gothic-looking half naked vampire screaming out crows into the ether. The limited colour palette does enough for the impact it gives the reader and, to be honest, shows what readers can expect from the stories inside. There is other artwork scattered around the pages that is of a similar nature, though not as shocking as the cover image by award-winning artist Vincent Chong.

This magazine leaves readers in no doubt that there is anything other than horror here, but it is not all fiction. There is an editorial section, interviews, and a gallery that could be of interest to those who like dark art. Ray Garton, does an introduction to this new magazine, and columns include Nancy Kilpatrick’s Bones in England, Robert Morrish’s Nightlight, and Ty Schwamberger’s Dark Spot. Paul Fry has a brief conversation with Vincent Chong and showcases the artist’s work while Ty Schwamberger interviews Kasey Lansdale.