I’m always a sucker for horror, and especially if it’s horror that supports a good cause.  The Reunion is just such a book.  Please support both a great author and a great cause. 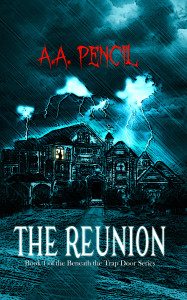 New York, NY — (SBWIRE) — 11/21/2013 — Since its debut in 1939, Agatha Christie’s ‘And Then There Were None’ has sold over one hundred million copies and never waned in popularity, proving that readers everywhere still thirst for the macabre. Author A.A. Pencil, a Christie fan since childhood, wrote her book, ‘The Reunion’ as a tribute to the ‘Queen of Crime’ and her most famous novel.

The first volume in the ‘Beneath the Trap Door’ series, the book spotlights what many alumni fear – the dreaded High School reunion. However, in this exceedingly creepy tale, former classmates get the surprise of their lives – as they battle to survive in the bloody hallways of a crumbling mansion, stalked by a murderer or perhaps something even more sinister…

C. Moore Catholic High School’s 10-year reunion was organized as many reunions are – to reminisce, to see who had made a success of their lives, and in truth, to gossip on who had not. But this party in the secluded, 1890’s mansion once owned by a long dead, paranoid WWII Veteran, was to become anything but typical.

After a horrible accident within the mansion, the alumni realize they are locked in and fighting for their lives. Instantly, tempers rise and fingers are pointed as the number of living alumni begins to rapidly decrease. Theories range from there being a murderer in the midst to the mansion possibly being haunted by the previous owner’s ghost.

Who or what is responsible and will anyone make it out alive?

Find out for yourself in this combination of a mystery and psychological thriller, with a twisted ending!

As the author explains, modern audiences still crave a dose of the good old-fashioned suspense that Christie was famous for.

“Murder never grows old – as strange as that sounds. Finding out ‘whodunit’ grips audiences like nothing else. They want to find the clues and solve the mystery,” says Pencil.

Continuing, “I hope Agatha Christie would be proud of my work. My aim from the very beginning of my career has been to bring something new to the mystery, thriller and suspense genres while still retaining the literary nuances that make Christie one of the world’s greatest-ever authors.”

Pencil is also delighted that Lavish Publishing is helping her support a charity that is very close to home.

“As a survivor of Lupus I can more than vouch for the great work of the American Lupus Foundation. My publisher is donating a portion of all November, December and January sales of ‘The Reunion’ to them. Not only do you get a great heart-pounding thrill from my book – you’re also helping a very worthy cause!” she adds.

‘The Reunion’ is available now:

About A. A. Pencil
A. A. Pencil works part time as a school nurse at an all-boys Catholic school in New York City. As a Lupus survivor, she uses writing as a significant part of her therapy and you will see influences from classical writers such as Agatha Christie and Edgar Alan Poe in her work. When not working or writing, she enjoys cooking, shopping and walking. She has sponsored a child in Mexico for over three years with a children’s organization. She currently lives in a borough of New York City with her extended family who are her greatest supporters.