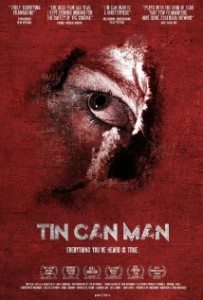 TIN CAN MAN
Reviewed by James B. Carter

Shot in black & white through a fish-eye lens for roughly ten thousand euros, Tin Can Man desperately tries to be an art house classic, and it almost manages to do so despite itself…almost.

Writer, director Ivan Kavanagh truly shines in the directors chair as his influences are obvious if not omni-present. He does an astute job of channeling Ingmar Bergman and Federico Fellini with his use of the monochrome palette, though while strangely intriguing Tin Can Man is no 8 ｽ.

The film tells the tale of down on his luck and newly girl-friendless Pete (no last name) played by Patrick O’Donnell, who puts in one hell of a performance as a passionate-less drone that you cannot root for on any level. In fact, I often found myself longing for his demise, mostly do to his constantly bewildering inference.

After a near firing at work, Pete returns to his mundane and dreadful abode to watch a little television, or the tele if you’re British. It’s not just his apartment that seems small in this film, everything seems cramped and claustrophobic. The film would have been more spacious if it had been shot in a phone booth, but again somehow that’s part of it’s charm.

Pete’s television intake is cut short when a homicidal lunatic by the name of Dave (no last name either) knocks at his door. Dave is masterfully played by Michael Parle, though at moments the performance is a bit over the top, even for a character driven piece like this one.

For reasons the filmmakers never share, the deranged Dave is on a mission to make Pete’s existence a living hell, and he does so in spades. He forces Pete to join him on a psychotic journey into madness.

It doesn’t take long to lose patients with the Pete character. He never once stands up for himself. Through the entire film you are constantly waiting for that moment when Pete shows that he has some sort of a backbone and is willing to fight off the verbally aggressive Dave, but sadly it never happens.

In the films climax Dave finally succeeds at his devilish goal, which is hinted at throughout the entire film. That goal being to turn Pete into a Tin Can Man. In the end Pete, by the side of one of the creepiest clowns ever captured on film, becomes a stage performer for Dave and his family of misfits. While forced to perform, Pete somehow seems his happiest, almost joyful of his subservient role.

While I wouldn’t have this film in my personal library, it ranks high on the weirdo-meter. If you’re a hardcore horror fan I think you have to see it, just to say that you have. Tin Can Man isn’t the ugliest girl in the room, but it’s not a supermodel either. If someone called Tin Can Man a toothless whore, I think most horror fans would stand up and defend it. I know I would.

Reviews Brought To You By The Terror Channel On http://movieandmusicnetwork.com