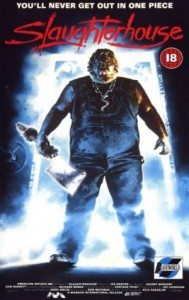 Location! Location! Location! In this spirited and sometimes unintentionally hilarious 1987 horror flick, a group of thirty-something high school students are scoping out the perfect place to film a purposeless VHS video shoot. It doesn’t take long for aging teenager, Liz Borden (played by future television stunt double Sherry Leigh) to settle on a recently condemned slaughterhouse whose owner, Lester Bacon has been persistently pressured into selling by the local sheriff, city officials and townsfolk.

Lester doesn’t want to close down or sale his dilapidated, farm fueled animal house. He and his family had painstakingly built it from the ground up, putting their hearts and souls into every dysfunctional square inch of the rustic tin roofed menace. When he feels his hunched back is unfairly being pushed against the wall, he fights back. That’s when the killing begins.

Lester and his mentally handicapped son, Buddy Bacon (played by Blood Diner‘s Joe B. Barton) go on a chop and schlock fest. What this film lacks in gore, it more than makes up for in ridiculously delivered, and painfully un-poignant dialogue that has withstood the test of time, along with a poorly preserved digital transfer.

The town doesn’t make much of a fuss when a couple of teenage kids go missing, meeting their tormented demise by Buddy Bacon’s bloody blade, but when the deputy goes M.I.A., a shit storm ensues, kicking off the easily predictable, but strangely entertaining climax.

This movie is a riot, and it has a lot of things going for it. The music is surprisingly good. All of the songs were written and performed by a band called Vantage Point, for whatever the hell that’s worth.

With two parts (body parts) Texas Chainsaw Massacre and a pinch of Motel Hell, Slaughterhouse has all the right ingredients, and everything you might expect from a late 1980’s direct-to-video horror genre cash in.

This mostly forgotten gem shines its brightest when Don Barrett graces the screen as Lester Bacon. He mumbles gut tickling insincerities as would the late, great and incomprehensible Drayton Sawyer, spouting off at the mouth when it came to his chili.

Slaughterhouse never won any awards, nor should it had, but I truly believe accolades are in order. I mean for starters it was in color, a talkie, and it doesn’t have an irrational running time. Don’t even get me gushing over the ending credits.

The biggest tribute you can pay this film is to give it a second look. After all of these years it’s still streaming and screaming. When ya watch it, please don’t be afraid to turn the lights off, or your television for that matter.