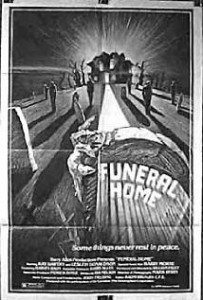 I remember seeing the cool box art for Funeral Home at my local video store in the mid nineteen-eighties. Being the horror hound I was, even at thirteen I had to nab it. I was expecting something torn from the same cloth as Phantasm, but unfortunately I got the threading’s of Ed Wood. The movie is tolerable, but it certainly doesn’t put the fun in funeral. There were even a few times when I threatened to walk out of my own home. If you are worried about me, I am fine.

Heather, played by Lesleh Donaldson (who did a great deal of voice over work in the Star Wars universe, notably Droids and Ewoks) travels far to a small town to help her grandmother turn an old mortuary into a bed and breakfast, which is odd being that by the time she arrives the place is already booming. Somehow they had to work someone in who was attractive and had big boobs! Thank you unnamed producer.

It takes Heather and her grandma about two frames to become best friends, that’s relatively quick considering that they had never laid eyes on each other until the day she arrived, kicking up dirt down that old dusty road leading to the once and future den of the dead.

Grandma Maude played by Kay Hawtrey (who has a huge body of work, and a huge body, including roles in Focus, Urban Legend and the classic Videodrome) is hiding a secret down in the cellar. It’s the brittle bones of grandpa, and good ole grandma has a knack for pretending to be her deceased lover, perhaps culminating from a nervous breakdown she had suffered years prior. Maude may be old, gray and crazed, but she still has enough vigor in her to commit some serious crimes (possibly grand theft auto) and murder.

Even dear Heather wasn’t safe when Maude went on a diabolical rampage, she came damn close to killing her with an ax handle (or some blunt wooden object) but came to her senses just in time to stop herself from doing the dastardly deed.

There is a silver lining, Heather found her grandpa, he was propped up and pickled in a chair, wearing a really nice, but loose leisure suit. He had lost a bit of weight. Not eating for eight years will do that to ya.

In the end elderly Maude Chalmers is arrested for her unlawful behavior. Personally I would have liked to have seen her kill at least three more people before she got caught, but ya cant get everything ya want from a slightly below mediocre horror film from the 1980’s.

Either Funeral Home was a poorly written love letter to Alfred Hitchcock’s Psycho, or a blatant rip off. Whichever it was, I have a soft spot in my heart for it. Hopefully Grandma wont put a stake through that soft spot anytime soon.

Reviews Brought To You By The Terror Channel On http://movieandmusicnetwork.com