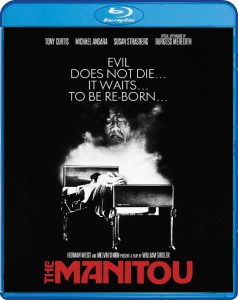 Based on the novel by Graham Masterton, The Manitou seems to be an event film lost in time, or at least the memory of most horror fans today. Released in 1978, it feels like a take on the highly successful and influential The Exorcist from five years earlier. It is a story about possession, of a sort, and evil, ancient spirits, of a sort, but it has a feel and a flavor all its own to make it its own thing, but is that a good thing?  Well, thanks to Scream Factory this one is now out on Blu-ray, but is it worth a get? Well, grab your medicine bag, be sure to be nice to your machines, and let’s find out.

The film wastes no time, starting off with a woman getting x-rays of a strange hump on her back that she never had before, one that is growing at a startling rate. We then meet the real star of the film, the woman’s friend and phony psychic huckster, Harry, played by Hollywood legend Tony Curtis. Since the woman is soon left in the hospital as her hump grows, it’s up to Harry to find out what the hell is going on and to try to find a way to stop it before his friend dies. He soon learns the hump is a long-dead Native American medicine man with a ton of magical power wanting to reborn so he could destroy the world or something. Harry gets help from a good (and living) medicine man, and the evil back baby gets help from “The Great Old One.” That’s right, this guy has Cthulhu on speed dial. Now I know why he’s so powerful.

This movie is definitely a product of its time in style and tone, and is a mix of good, scary ideas and more cheese than you would find in Wisconsin. The fast-growing back fetus of the evil shaman is damaged by medical x-rays, so he comes out a little person. The good medicine man helps the white man for a donation to some Native American college fund, and tobacco. And the ending…wow, just wow. But it has its charm, is well made and acted, and is a fun watch.

Let’s get to the extras on this new Blu-ray from Scream Factory. There is an audio commentary track with film historian Troy Howarth that I found to be very interesting. There is a 28-minute interview with Graham Masterton, the author who wrote the novel that the film was based on. There is an interview with the producer, David Sheldon, which runs for 11 minutes. There is also the theatrical trailer, television spots, and an image gallery. Not bad for a movie as old and mostly forgotten as The Manitou.

The Manitou is a weird, wild, time capsule of the 1970s in film form. As a horror movie it has its moments, but the final act of the movie goes far off the rails and I sort of love it for that. While I would have liked an ending I could take seriously, watching (SPOILERS for a 41-year-old movie to properly illustrate a point) a woman shoots machine spirit laser beams at a deformed Native American dwarf in space while the eye of Cthulhu looks on is just awesome! If that sounds like the movie for you, be sure to give this one a watch when the Blu-ray comes out April 16th.