The Iguana with the Tongue of Fire – Blu-ray Review 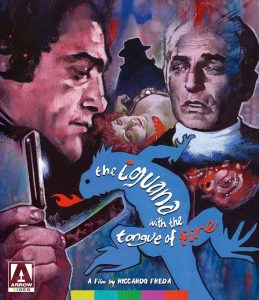 I love giallo films, those tasty slices of murder, mystery, sex, and insanity from Italy. Precursors to my much-loved American (and some Canadian) slashers of the 80s, I have seen most, have like most of what I’ve seen, and at least heard about the rest. Or so I thought, but then I got this new Blu-ray from Arrow Video in for review. Where the hell did this come from? Seriously, with a title like The Iguana with the Tongue of Fire, how did I not know about this? Well, grab your black gloves, trench coat, and favorite knife and let’s see what this little yellow movie is all about.

Unlike about 98% of other gialli, this one is set in Dublin where a young woman has acid thrown into her face and her throat slit in a display of awesome over-the-top gore that hasn’t held up well today, making it all the more awesome. Her body is then found in the truck of a car belonging to the Swiss Ambassador. So it quickly become an international whodunit and why, with more throat slashing and acid tossing to come. Here the killer doesn’t have the iconic black gloves, instead hiding their identity behind some huge, dark sunglasses that everyone just so happens to own. Oh, and every time they show someone with the shaded specs there is a cheesy music sting to make sure you don’t miss a possible suspect for the murders.

This is a fine giallo but it’s nothing exceptional. There’s not enough gore or gratuitous nudity for my taste in these type of films. Although to be fair, actress Dagmar Lassander does her best to up the skin quotient whenever she can. The direction is capable but it’s not noteworthy, so much so that the director purposely used a fake name and not just to anglicize things like so many Italian movies do. As for the story and the mystery, it is sadly forgettable and while not bad, it’s just meh.

Okay, let’s move on to the extras that Arrow Video has given us on this new Blu-ray release. There’s an audio commentary track with two film critics, Adrian J. Smith and David Flint. Then cultural critic (that’s a thing?) Richard Dyer comes on and talks about his feelings about the movie for 22 minutes. DJ and music buff Lovely Jon has a featurette about the music in the movie that’s 26 minutes. There is a 21-minute interview with the film’s assistant editor Bruno Michell and an interview with actress Dagmar Lassander that’s over 20 minutes in length. There are the international and Italian trailers and two different photo galleries. Add to this a 43-page, full-color collector’s booklet and you have the usual amazing package from Arrow.

The Iguana with the Tongue of Fire is an okay giallo, worth a watch for fans of the genre, but I don’t think it has much to offer for repeat viewings. So I recommend this to fans of the spicy Italian cinema and if that’s you, give it a watch.