The Devil Rides Out – Blu-ray Review 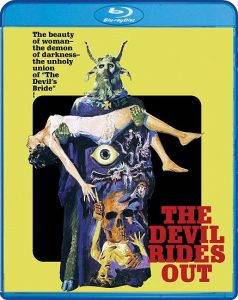 So here we got a film by the legendary Hammer Studios, directed by Terence Fisher, based on a Dennis Wheatley novel, with a screenplay by Richard Matheson, starring Christopher Lee (in one of his favorite roles), and now on an excellent-looking Blu-ray from the always awesome Scream Factory. Come on, do I really have to sell this to you? Let’s just jump into it.

Lee and two buddies are living large in the 1920s and they come together for a reunion, but uh-oh, the youngest member of the trio has fallen in with a group of Satanists lead by the amply sinister Charles Gray. Hey, if he could be 007’s nemesis, Blofeld, he is more than up to the job of being the high priest of a witch cult. Anyway, Christopher Lee isn’t going to stand for any of that, so he takes charge in the plan to rescue his pal before his “Satanic baptism,” and in doing so he must match his occult skills against the coven’s black magic. The film abounds with Dennis Wheatley‘s knowledge of of the arcane and occult, at least as it was known in the 70s, and the highlight is when goat-headed Baphomet his-own-bad-self makes a guest appearance at a black sabbath. As The Simpsons put it, “Who’s that goat-legged fellow? I like the cut of his jib.”

To be honest, this film isn’t all that scary; it’s a bit too goofy and groovy for that, but man oh man, is it a lot of fun. First and foremost, Christopher Lee is straight up the boss in this, and his presence makes the movie. All the actors do good work in here, but Lee eclipses them all in talent, delivery, and sheer force of charisma. The effects are very, very dated, but if you can go with that then there is a lot of charm to them. However, as was typical in movies from Hammer Studios, the cinematography and the set dressing is gorgeous. The story is pretty basic by now, but everything moves along at a clip and the movie never outstays its welcome.

On to the extras that Scream Factory has put out on this new Blu-ray of this classic film. There is an audio commentary track with filmmakers and fans of the film, Steve Haberman and Constantine Nasr, and the son of the late Richard Matheson, Richard Christian Matheson. There is also a commentary with the one and only, and now sadly late, Christopher Lee and fellow actor from the film, Sarah Lawson. There is an interview with horror critic Kim Newman about the movie, and another with another author and critic, Jonathan Rigby. There is a featurette about Dennis Wheatley and his work with Hammer Studios, a making-of feature, and an episode of the old World of Hammer TV show. A stills gallery and a theatrical trailer bring the goodies to a close.

The Devil Rides Out is a great slice of Satanic cinema; it is one of Hammer‘s best films, and with that studio’s history, that’s saying something. If you are a fan of Lee, Hammer, occult movies, British cinema, or any combination thereof, I highly recommend this one to you. It is considered a classic for a reason, so get it when it comes out October 29th.