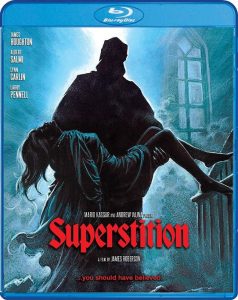 In 1982 when Superstition came out, slasher films were all the rage at the cinema. Maybe that’s why this film about ghosts and a witch’s curse plays out like a masked maniac with a knife flick. It has awesome and improbable kills, gore, and victims disappearing one by one and no one seeming to notice, but it also has a mystery as to who is the embodiment of the undying witch, forgotten history to be uncovered, and various supernatural elements. So is this largely unknown slice of 80’s horror an uneven, schizophrenic mess, or is it a genre-blending smoothie that goes down oh so good? Well, grab a silver cross, stay away from microwaves, and let’s find out.

There’s an old spooky house owned by the church that local teens go to so they can make out. After a pair of gloriously over-the-top murders, we the audience know that the scary stories about the place are true. Too bad the new priest and his family moving into that house don’t know that. There is the father battling alcoholism, the devoted wife and mother, two cute teen daughters for some added sex appeal, and the young son looking for adventure. And if you think you know who will make it out of this movie alive, you are wrong. You see there is a pond nearby and in that pond is the ghost of a witch and boy, is she pissed. So what follows is a basic stalk-and-slash bolstered by some great gory kills, decent acting, some memorable lines (I will always love: “Shut your bitchy mouth!”), and a workmanlike direction is a movie that feels like one-half ghost story and one-half slasher. It also uses its supernatural elements to do more WTF moments than the basic masked maniac movie. My favorite is when the circular saw blade comes off a saw in use, bounces across the floor, hits a guy in the chest, knocks the poor man into a chair, and continues to spin and cuts through his body to come out the back of the chair. Oh, and then there is the microwave scene. Oh, and the window scene. Oh, and the pond…and the elevator…and…and… Yeah, there are a lot of great moments in this movie.

Okay, on to the extras that Scream Factory has put on this new Blu-ray release. First off there is a 30-minute interview with James Houghton who played Rev. Thompson, the lead character in the film. There is also a 24-minute interview with director James Roberson. The theatrical trailer and a TV spot are also on here. So there are not a ton of special features on here, but there are more for a movie this forgotten and overlooked that I would expect, so good on Scream Factory for that.

Superstition is an excellent example of why I think the 1980s were the best time for horror movies. It’s not to be taken seriously at all, but it is a load of fun and filled with great OMG moments. It’s essentially a slasher film so if you are fans of those you will be happy with this. As I am a fan, I love this one and can highly recommend it. Make sure you get it when it comes out April 16th.