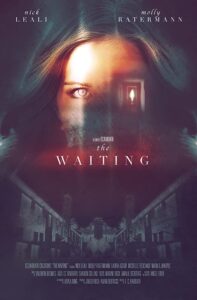 The Waiting is a mixed-genre film, combining supernatural and humorous elements. The film begins with a tense scene taking place inside the main setting, which is the Lodge Hotel. Two cleaning ladies are outside of room 101, reminding each other that they have exactly sixty seconds to get in and out.

We then become acquainted with the main character, Eric. We find out that Eric does not have much luck in relationships, or in life. The actor that plays Eric, Nick Leali, looks like the offspring of Seth Rogan and Sean Astin, and has the enjoyable comedic timing of both actors. Eric takes a job at the Lodge and quickly becomes involved with room 101. When I say quickly, I mean quickly. It feels as if Eric learns about the room on his first day and immediately becomes committed to dealing with the entity within so that he can prove to himself (and others) that he is not a loser/quitter.

We come to learn that room 101 is haunted by the ghost of Elizabeth. She was left to wait for her lover in that room and has never left. She is absent when a guest first enters the room but makes her appearance after one minute. Her presence is threatening to ruin the hotel financially, and Eric becomes involved with both trying to save the Lodge and trying to free Elizabeth.

The story itself is not scary, despite the ghost character. The focus of the plot is on loneliness and the fact that people come and go in life making it difficult to trust or love again. As I said earlier, I felt there needed to be more of a build in terms of Eric’s interest in room 101. That said, his interactions with Elizabeth are sweet, and oddly romantic. Leali is a better actor than the supporting cast but since he is the focus of the film this imbalance is not distracting.

The Waiting has adult situations due to discussions of relationships and affairs but contains no inappropriate language, violence, or sexual situations. It is a fun film, with nice shots provided by Rabbath. The Waiting makes for pleasant rainy-day viewing.