Movie Review – GHOST IN THE GRAVEYARD 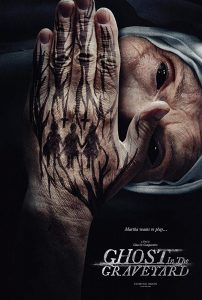 The film opens with a group of kids running through a dark graveyard playing a childhood game, until unexpected tragedy strikes one of them dead.  With the film’s creepy tone firmly set, we fast forward ten years later to when one of the kids, Sally (Kelli Berglund), now a teenage mom, returns home to her dad Charles, played by Jake Busey (Starship Troopers, Stranger Things), and big brother Billy (Zebedee Row). Sally’s homecoming dredges up more than just memories when old ghosts plague her dreams as she struggles to fit into her old life.

Back in school, Sally does her best to keep her chin up despite various rumours about her whereabouts over the past several months. We’re reminded of the high school awkwardness and all its horrible cliques and pressures. Life gets even tougher when a boy is killed near the grave of the young girl Sally had watched die ten years prior. To make matters worse, Miss Popularity, Zoe (Olivia Larsen) makes it her mission to find out what Sally’s deal really is. Turns out Zoe isn’t the only one demanding answers. Sally also questions her origins amidst a host of red flags, and soon finds herself fitting into town in ways her worse fears couldn’t have prepared her for.

The story takes a hairpin turn when Sally’s dad spills the beans to his son about the true nature of their family history. In this emotionally charged scene, Billy assures his dad he’s got their back and is ready for war (although he’s ultimately tasked to babysitting his nephew while his ol’ man runs off to kill witches, but I digress). It’s a matter of good vs. evil as humanity balances precariously across a thin wire, and it’s up to Charles to fulfil his legacy and save them all.

The predominately young cast flesh out convincing performances that occasionally rise above the content they’re conveying. Jake Busey embodies your typical hard-working dad who’ll do anything to protect his kids. Veteran actor Royce Johnson (Daredevil, The Punisher) also lends his expert chops to the role of Sheriff D., who does his part in protecting Charlie and family from the evil that’s come to town.

GHOST IN THE GRAVEYARD may not reinvent the wheel on ghost stories, but as an easily digestible, creepy romp supported by a fully capable cast, it’s worth keeping at least one eye open for.