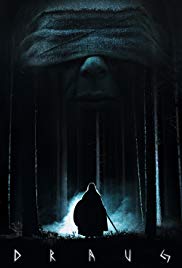 Flexing its production value and utilizing some gorgeous settings from Sweden’s forested wilderness, DRAUG transcends past culture and language to deliver the most frightening aspects of its native folklore to a diversified audience.

The story takes place in 11th century Sweden as Sheriff Hakan (Ralf Beck), along with his fosterling, Nanna (Elna Karlsson) and closest friend, Gunder (Urban Bergsten), are sent by the king to find out what happened to the Bishop Burke and his missionary, who’ve not yet returned as expected. Despite their marching orders, Nanna and her search party share some serious misgivings about the wooded border separating south from north, and the terrible curse rumoured to dwell there.

The quiet moments of dread throughout the film are equally matched by explosive bursts of terror in a world where your mind is as likely to kill you as anything else you may encounter. Even as one of their wounded comrades, delirious with fever, screams in anguish at unseen things, you start to wonder if maybe he’s the most rational of them all.

The further into the forest they travel, the deeper its haunted rage burrows inside them, and it won’t stop until it has them all. Not even a plot twist, however hinted at, slows down the grisly action late in the film as things take a turn for the even stranger as the hunters turn to the hunted. Every fleeting hope is devoured by the all-consuming evil of the Draugr, the corporeal undead of Norse mythology.

Although the cast provide nothing short of adequate to outstanding performances, further backstory would have added to the overall empathy viewers should have felt each time the Draugr picked off another victim. Despite this quibble, the film still manages to drive us towards a heart-pounding finale certain to unsettle your senses in the most pleasing of ways. Shying from greatness, DRAUG still leaves plenty to enjoy.