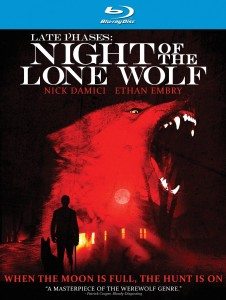 Werewolf movies are going through a bit of a renaissance it seems, and I could not be happier. For far too long, lycanthropes have been the red-furred stepchild of the horror genre. For every American Werewolf in London or The Hollowing, there is American Werewolf in Paris, The Howling part any of the half-dozen, half-assed sequels that followed the first movie, Animals (which is a real shame, as it is based off of a good book), Darkwolf, The Beast of Bray Road, Cursed (oh lord, don’t get me started on that Wes Craven stinker) and on and on I could go. But lately there have been some werewolf winners, and yes, this is one of those.

Let me clear something right up, the Blu-ray/DVD release of this movie has sort of done an Edge of Tomorrow, Live / Die / Repeat on use here. That is, they changed the name from Late Phases for its theatrical release, to now Late Phases: Night of the Lone Wolf for the home release. I guess they thought that for a werewolf pic, you really needed the word “wolf” in there somewhere, but that’s just silly, not to mention an unnecessary mouthful. Anyway, everyone got that? Good, let’s move on.

The always awesome to watch, Nick Damici, plays a blind, elderly, but feisty Vietnam vet, Ambrose, who moves into a new house in a retirement community. It’s just his bad luck that he does it on the day of a full moon and that there’s a werewolf living in the neighborhood. After meeting one nice neighbor, and a lot more nosey, nasty ones, there is a werewolf attack once night falls. The nice neighbor lady is killed, and so is Ambrose’s loyal guide dog, but our crotchety old vet survives. Not being an unbelieving dummy like most horror movies protagonist, he puts the clues together in record time and figures out that his assailant was a werewolf, even if he never saw it. He now has 30 days until the next full moon. 30 days to figure out who the werewolf is among his neighbors, and how to fight it and kill it, because he knows the wolf will soon be back at his door. He also knows he has to do this by himself, because no one would ever believe him.

What follows is largely a character piece focused solely on Ambrose, as the werewolf doesn’t show up again until the very end of the film. So the vast majority of this movie is firmly on the shoulders of Ambrose to carry and keep us invested and entertained enough to keep watching. Thankfully Nick Damici is more than up to the task. He is the reason to watch this movie, as he is simply amazing in it. That’s not to say the other elements in here are lacking. Well, one is, but I’ll get to that in a moment. But the direction is spot on, the writing is good, and the other actors all play their roles well, with Ethan Embry as Ambrose’s son and Tom Noonan as a caring priest being the highlights for me.

Now the one and only thing about this movie that I didn’t absolutely love is the look of the werewolf. I give this movie full props for using practical effects, even during the shape changing scenes, but the final product was far more silly that scary. That said, it is also a fact that in spite of that, I still really liked this movie, and it actually pulled off more than a few scenes of tension and horror. So if nothing else, that is a testament to how good everything else in this movie is, that even with a less than frightening werewolf it doesn’t ruin things.

So the movie is really good, the werewolf effects aren’t that great, how about the extras on this new Blu-ray from Dark Sky Films? First and foremost, there is a director’s commentary with Adrián García Bogliano. Next there also are a couple of featurettes. The first is 14 minutes long and is your pretty basic making of short. The second one is a FX featurette on making the werewolves that is oddly twice as long at 30 minutes. Lastly there is the trailer.