Interview with Ryan Kruger, Creator of the Movie ‘Fried Barry’ 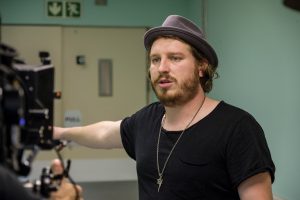 Hell Notes: Regarding the actor who played Barry, Gary and his background as mostly the guy who plays extras in films: Where the heck did he manage to pull this performance out of?

Ryan Kruger: I’ve worked with Gary in numerous projects over the years and he’s always excelled as a character actor because of his unique look. However, carrying an entire feature film as the lead actor was another challenge entirely. Even though Gary lacks the experience, I firmly believe he was meant to play this role: even the very best actors out there couldn’t play Fried Barry the way he did. He gave it his all and it really shows on screen.

The Fried Barry short is based around a very simple concept: the highs and lows of a drug addict freaking out in a warehouse during his latest hit. I made it as part of a series of experimental short films and never intended to take the idea further because of the simplistic concept and its place in the experimental series. After the hugely positive response to the short – 57 official selections, 12 awards, great reviews, and a whole slew of Fried Barry fan art – I knew I was onto something. Many reviewers were asking if it would be adapted into a feature film and that got the wheels turning. I developed a story suitable for a feature film based mostly on the Fried Barry character and what kind of journey he would experience. It snowballed into this great story that I felt compelled to tell.

What would you classify as the biggest challenge in putting something together with so few running-time minutes as compared to working on a larger piece of work?

Fried Barry is by far the most expansive project I’ve ever undertaken. I have a lot of experience shooting commercials, short films, and music videos but a feature film is an entirely different animal. Feature films are an entirely different league compared to short films: the stakes are higher but they’re also much more rewarding. With the help of an amazing cast and crew as well as my own personal experience, I felt I was totally ready to dive into the world of features. Now that I’ve finished Fried Barry, I’ve got a taste for features and I can’t wait to shoot my next one!

Does growing as a filmmaker with the creation of the feature film version of FRIED BARRY mean that you’re not going to be putting as much focus into making more of your shorts?

I’ve definitely gravitated more towards feature films in the past year or so and definitely hope to keep growing in that realm. However, I would never leave short films behind entirely. I have so many ideas that I want to put on film – some of which would only work as short films and not features. For example, my collection of experimental films is still in the works and I’m very much looking forward to shooting the next part in the series.

Considering the frantic style of shooting for your FRIED BARRY short, is it safe to say you left far more frames on the editing floor than what made it to the final cut? What can you tell us about the editing process that helped create such an intense effect to the film?

Not really. I had an idea and I only shoot what I need, which saves a lot of time. I think there’s a lot of directors out there that don’t know what they want and they shoot more to be safe in the edit room. But for me, I normally shoot for the edit. My brain works over time when filming as I know what’s gonna cut and what’s not. A lot of the time I do come up with new ideas on the spot and shoot them also, but the editing style and music and the way I direct my projects are all a part of the final vision I have for that project. FRIED BARRY was designed to suck you in and make you feel uncomfortable to watch and goes on more than you expect, but still keeps you interested. Always reminds me of a “don’t do drugs” ad for kids to scare the shit out of them.

If we can talk about distribution for a moment, how would you compare distribution challenges and opportunities with putting a short film in front of as many people as possible with getting a feature film seen on as many screens as possible?

The main difference with distribution for short films vs. features is simply that there’s a much greater market and demand for features. This factor plays into every part of the world of distribution for the two media. Although there are a number of great emerging platforms online dedicated to short films, the best way to get your short out there is still festivals and YouTube/Vimeo. The downside of this is that it’s very difficult to support yourself as a filmmaker if you’re only making short films. When it comes to features, avenues for distribution are a lot more numerous but no less treacherous. The most important thing with feature film distribution is that whatever distributor/sales agent/platform you choose, they will see the value in your work and treat it with the care and respect it deserves.

What do you think fans of the short film are going to be most surprised with and/or pleased about when they finally got to watch the feature film for FRIED BARRY?

Although the Fried Barry feature still very much follows my personal style, it has grown in an entirely new and unexpected direction compared to the short film. Of course, the feature film will dive deep into the character of Barry and fans of the short will get a chance to really get inside this character’s head. Additionally, we’ve expanded on the surreal world of the short and created a vibrant and gritty portrayal of Cape Town, South Africa that has never been seen on screen. Along the way there are a lot of surprises and unexpected turns in the tale. Although this film is a genre-bender, it will appeal to fans of horror, sci-fi, and even comedy. My aim is always to surprise and entertain my audience; Fried Barry excels in these two regards.

And when can fans expect to check out the finished feature project?

Fried Barry will have its festival premiere at the end of 2019 and wide release is expected in 2020.

Anything else you’d like to say about FRIED BARRY and what unassuming fans should know about moving forward?

Thank you for following the story of Fried Barry! Prepare for the unexpected, and keep up-to-date with news, images, and trailers on social media!

Thanks so much, Ryan! 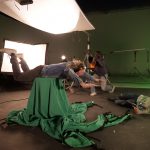 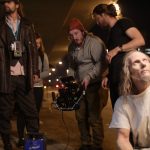 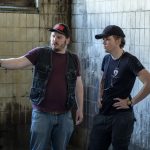 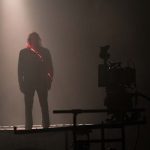