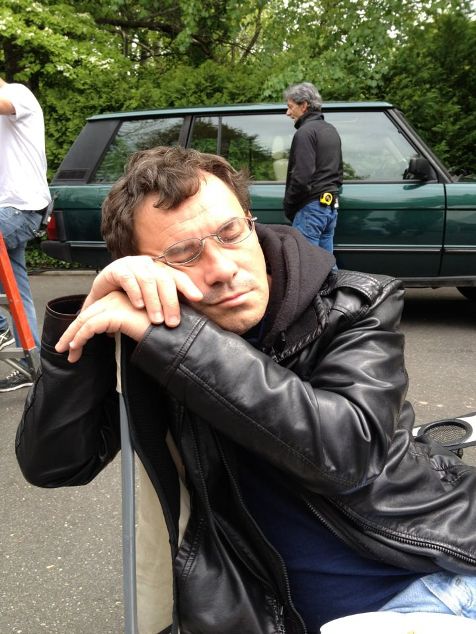 Craig Lindberg has been doing make-up artistry and occasional FX work in television and film for over thirty years and has been the recipient of an Emmy Award nomination for his work on Boardwalk Empire and Saturday Night Live. His outstanding abilities can also be see on THE AMAZING SPIDERMAN, SHUTTER ISLAND, LIMITLESS, The Black Donnellys, The Walking Dead, and Person of Interest among several others.

Along the way, he met author and film maker, Gregory Lamberson and ended up working on several of Greg’s films including UNDYING LOVE, THE LEGEND OF SIX FINGERS AND SLIME CITY MASSACRE. Most recently, Craig focused his talent on Greg Lamberson’s newest feature film, JOHNNY GRUESOME, a monster movie over thirty years in the making since Greg first penned the script when he was a mere nineteen years of age.

I was lucky enough to enjoy catching the film during its Canadian premiere in Hamilton, Ontario, but even luckier still to manage stealing a bit of time with the man behind the mask of JOHNNY GRUESOME, Craig Lindberg. Sit back and enjoy as we discuss how Craig spent a few weeks away from his usual gig on set of Saturday Night Live to give an old rebel zombie a freshly rotten look that’s sure to make an impact on even the most seasoned of horror fans.

Craig, I understand you had worked on Greg Lamberson’s Undying Love and The Legend of Six Fingers before tackling make-up effects for Johnny Gruesome. How did you and Greg first merge your creative efforts?

I did Greg’s UNDYING LOVE and NAKED FEAR in NY after replying to an ad in a NY trade paper. I met up with him and showed him my portfolio and that’s how we met.

Since those films I’ve been involved in some of his movies since he moved.

Does it help in any way with the work you do on current projects when you’ve had the chance to work with a film maker on previous films? During the Canadian premiere, you had explained to the sold-out audience there were seven separate looks for Johnny Gruesome based on whichever level of rot he happened to be at during any given scene. Can you elaborate on this process, please?

Greg has always let me do “my thing.”

He would tell me what he wanted and allowed me to build upon his ideas and let me create.

In the case of JOHNNY GRUESOME I would do a series of sculptures and send pictures to Greg for his approvals and changes.

Nothing beats experience so I can bring to any table my knowledge of what, how, and when to do what is needed.

Johnny Gruesome’s image has been seen for a while now on books, CD covers, and posters, so his look has been established. But the problem arises of how to take a two-dimensional image and make it three-dimensional, and put it on an actor that has to walk and talk and, on one occasion, get submerged in water.

Johnny’s look has always been a corpse with long hair. Very skeletal.

Actors need to emote. They need to act, and makeup should not interfere with that, or interfere as little as possible.

(Johnny) Gruesome is a rotting corpse. His body is exposed to the elements and he needed to decay.

The masks I created for the looks were a single-piece silicone appliance that were painted and sculpted to show that decomposition. He went from grey skin tones to chalky grays to browns and blacks.

I also had concerns about his nose.

Since a nose protrudes, it’s not an easy task to disguise it unless a mask is used or CGI removes it.

In a case with a mask, the mask has to be made to protrude further than the nose.

From the front it’ll look great, but it can look like a snout from the sides.

With each separate look for Johnny, did you at least have the luxury of having each scene filmed in chronological sequence, or where there times where you had recreate one of the seven looks depending on when certain scenes may have been filmed as you went along?

I’m sure there were many times we shot out of order.

So, because I knew how to work with Anthony del Torre’s hair and face, the actor playing Johnny, I utilized those to save as much of the makeup and mask as possible.

I knew what would be seen or what I could hide in order to make the makeup application as quick as I could.

Most of the time the pieces are single use only.

Considering the extensive work you’ve done over the years on big-budget projects such as Boardwalk Empire, The Amazing Spiderman, and the ongoing television show Saturday Night Live to name but a few, what’s the biggest difference(s) between working on set with major budget productions compared to working on a low-budget, independent film as with Johnny Gruesome? Are there many similarities to your process or approach to piggy-back off of?

I treat all my projects the same way.

I feel a director wants the same things that all directors want.

Only thing that changes is what materials the project can afford; knowing what products are good to use for their price and knowing how to make any piece look like it costs more than its value.

Where there any major challenges along the way which, looking back now,  you might think, wow, can’t believe we pulled that off?

Most of the amazements come from short schedules.

I do a lot of episodic television and the schedules can be super short with even shorter turnarounds.

This is where knowledge is an incredible help.

I’ll often think about how to approach a job and by the time I get to it it’s already been thought out.

For fans of your work, where’s the best place to keep updated and otherwise stalk you on current projects you may be working on next?

I can be found on FB and instagram (at) craiglmkup