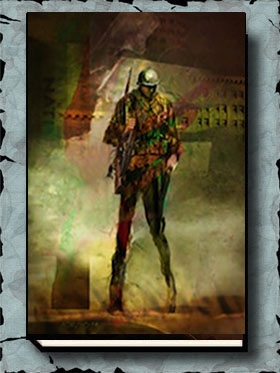 Barry Hoffman, former teacher and Bram Stoker-winning publishing of Gauntlet Press, recently let loose with another outstanding effort with his short story anthology, Brothers In Arms, edited with Richard Christian Matheson. The anthology is a tribute to the classic novel, The Beardless Warriors, written, of course, by the late legend Richard Matheson. With a reputation for celebrating the greatest writers of dark fiction with consistently top-notch books, it should be no surprise that this anthology created an opportunity to gather the most revered dark fiction writers living today.

In this interview, Barry opens up about what got the whole thing kicked off in the first place and what this particular project meant to him – and for the ongoing legacy of Richard Matheson.

Barry, I suppose the first obvious question to ask is, of all the fantastic novels to choose from, what made you decide on a collection of stories in tribute to Richard Matheson’s The Beardless Warriors?

I had promised Richard a few years before he died that we would publish The Beardless Warriors. In the meantime we published Other Kingdoms and then Leave Yesterday Alone. I wasn’t about to go back on my word even after Richard passed. I spoke with his son Richard Christian Matheson and we both agreed there should be some tribute where other authors could honor Matheson. That turned into Brothers In Arms.

What can you tell us about the selection process of choosing each story to be included in the collection?

R.C. and I wanted diverse stories. The Beardless Warriors is far more than just a war novel. So, while some stories deal with soldiers in war itself, others deal with how soldiers react when discharged or the impact on families who lost loved ones. Donn Albright, Ray Bradbury’s bibliographer, found the perfect opening story for the anthology. A quiet story, it deals with the last night a couple spend together before the young man is deployed. The anthology, in a manner of speaking, is like a novel itself — Bradbury’s beginning prior to any battle and ending with how soldiers and their families deal with the casualties of war.

What was most rewarding was reading each story as it arrived. We didn’t know what to expect from each author so it was like opening a present on Christmas morning when one arrived. The most challenging was making sure we had a diverse group of contributors. We have authors of a variety of genres and we definitely wanted the point of view of female authors.

Did you provide any specific guidelines to the authors before they set out to provide their entries?

No, that’s what made it so rewarding. We gave a general word count, but we were flexible. Some pieces were shorter than the word count we suggested and a few were more lengthy. We provided some subject matter we were interested. Like I said above, we didn’t want all stories dealing with war itself or the battlefield setting of Matheson’s novel. Then we left it up to each author to provide their voice.

What did it mean for you, personally, to have worked on putting this collection together?

This was my gift to Richard Matheson. I worked with him for over twenty years and we were friends, not just author and publisher. I was overjoyed so many authors agreed to take part in this tribute to Richard. I know he would have been thrilled by the outcome.

Regarding Clive Barker’s additional contribution to the front cover to go with his story, Twilight at Towers, did you always have him in mind for the cover art? Did you provide much influence toward the final art or leave it all up to Clive?

I’ve long ago learned not to provide Clive with any guidelines other than to explain what the anthology dealt with. Of interest, Harry O. Morris did the cover art for the novel with Clive providing the cover art for the anthology. Knowing Clive was such a wonderful artist I approached him early on and gave him the freedom to provide what he desired. I was thrilled with the result. A very dark cover that one can stare at for hours with its many distinct images.

What do you feel will be the biggest takeaway for readers once the last story has been read?

In a way I hope readers tackle the anthology first, and when they have finished then read The Beardless Warriors. The novel, I believe, is unique in its harrowing tale of a youthful soldier tossed into the fray with virtually no training. Matheson had a unique spin on vampires (I Am Legend), ghost stories (Hell House), and every other subject he wrote about. I feel that readers will enjoy the novel even more if they read it after the stories from the anthology.

Moving forward, do you have any other tribute collections like this in mind for Gauntlet Press for us all to look forward to?

It’s hard to say. This was an exhausting and often frustrating endeavour. We contacted virtually four dozen authors and many declined because of pressing deadlines, personal obligations, and in a few cases, illness. I had a dream line-up I hoped would contribute and was fortunate that a good two-thirds agreed. But editing such a collection is an incredible task and, as it is, I need to move on to publish novels and scripts like Taxi Driver. That said I’m not closing the door to another tribute.