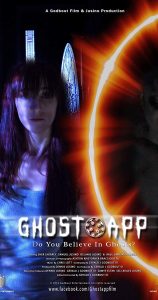 We dive straight into the creepy action as our star character, Sher Shearey, has a snack and movie session interrupted by a random text asking if she believes in ghosts. When Sher confides that yes, she does in fact believe in ghosts, she’s sent a link to an app claiming to help her see what’s beyond. Sher refuses to download the app because, well, stranger danger. All seems as it was until Sher wakes up to the ol’ “pull the sheet off the sleeping woman” trick. Leaping off the couch, she discovers the app downloaded anyways, just in time to offer a fresh look at her suddenly haunted home.

Not even her stuffed Dalmatian can be trusted anymore, and rips a chunk from her leg. Or did it? Desperate to convince herself that the gash isn’t real, she washes a bloody wound, only seen through the lens of her cell phone. Repeating to herself, “this isn’t real,” it’s hard to tell if she’s referring to the ghastly wound or a script that didn’t have the decency to tell her to just stop looking through her damn phone. But, where’s the fun in that, right?

As the fear continues to pile up, the bumps in the dark start to show themselves in genuinely scary fashion, thanks to make-up artist Katie Galhart. And, once Sher’s phone is no longer needed to see beyond the living, her night goes from bad to worse as her uninvited spectres amp up their game as things start to get physical. With a crescendo of panicked screams, the end credits kick off a funky techno score. We’re left to ponder the importance of what a really good malware app might have meant for poor Sher, despite the short-lived fun of watching her life spiral into cellular hell.

Oh, and be sure to watch the end credits to completion, lest you miss out on the app’s true intentions. Do it for Sher.