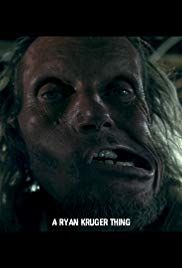 Don’t let the fleeting time span of 3 minutes and 44 seconds fool you. Fried Barry presents a virtual isolation chamber of nightmarish proportions and makes a home under your skin faster than you can read this paragraph.

Cast into some dishevelled building clearly in need of a wreaking ball, we are at once absorbed by the maniacal mind of one presumably known as our title character, Barry, who is far from well. Viewers bare witness to his insanity and what’s clearly one helluva mind fuck courtesy of whatever chemical compound he just squeezed into his hungry vein from which there is no turning back.

Not to be confused for the next “hey, kids, don’t do drugs!” campaign, this little ditty’s core design is meant to take us along the mad highway of Barry’s euphorically insane trip as if we are the gnat that gnaws at his brain and not just along for the ride.

With little time to spare, creator Ryan Kruger perfectly blends a tension-inducing score from Haezer, some kinetic camera work for psychedelic affect, and brilliant special effects that are so subtly used I almost thought I was seeing things that may not have actually been there. Mix all this together with a most believable performance by (method?) actor Gary Green, and it all gels together into a psychedelic experience well worth repeating if only to test the boundaries of your sanity. If this grungy short is proof positive of what Ryan and his team can do in just a few scant minutes of running time, then colour me intrigued to find out what they’ve done with the feature film version now in post-production and scheduled for release by the end of 2019.

Check it and prepare to get fried!

You can watch the film at the link below: