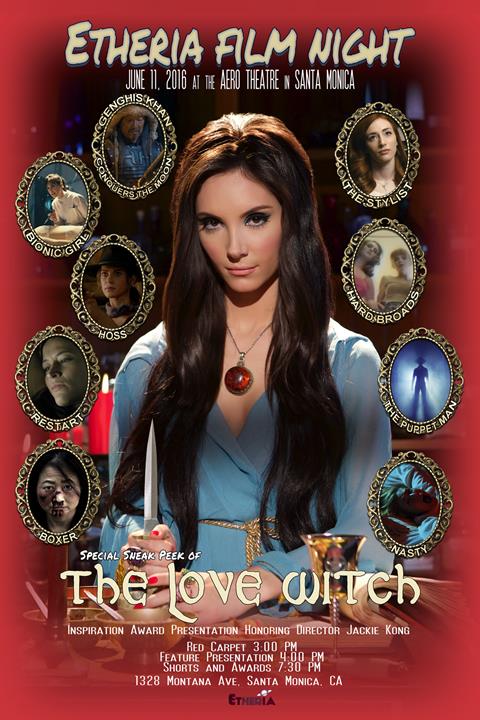 Etheria Film Night (www.etheriafilmnight.com) is proud to be honoring Jackie Kong with the Etheria Inspiration Award on Saturday, June 11, 2016. The Inspiration Award is presented to people who have inspired women to write and direct genre films & TV. Past recipients include Jane Espenson (“Once Upon a Time”), Lexi Alexander (“Punisher: Warzone”), Jennifer Lynch (“The Walking Dead”), and Mary Lambert (“Pet Sematary”).
Jackie Kong is a director, producer, and screenwriter known for irreverent comedy and over-the-top horror films. In 1983, she made her feature film debut as director with the low-budget drive-in horror film The Being, which starred Martin Landau and Jose Ferrer. In 1984, she followed up by directing and co-writing the breakout comedy Night Patrol, featuring Linda Blair, about a Los Angeles policeman moonlighting as a stand-up comedian. Kong received a Platinum Video award from the RIAA for Night Patrol, which became a college-party film staple. Night Patrol was a major worldwide theatrical success, setting the stage for Kong to direct the comedic cult horror film Blood Diner, released in 1987.
Kong added her comedic flair to Blood Diner, changing the traditional horror film into a gore fest with outrageous effects and comedy, ultimately pioneering a new subgenre of horror film. It is now one of the most beloved horror films of all time. The fact that Blood Diner was directed by a woman blew audience’ and critics’ minds. She followed that with another comedy, The Underachievers.
Kong’s films are always irreverent, inventive, shocking, and funny. Weirdly, she enjoyed making the horror films much more than the comedies. “Making a monster movie was actually more fun than making a comedy,” she says. “People watched the comedies and because they’re laughing, think it must have been so much fun, when in fact that was harder work than making a monster movie. There’s something about getting everyone in makeup and costumes and creating a hyper reality, that’s so much more fun. Both are tough crowds to surprise.”
Kong’s next film project is the feature comedy Lost in Vietnam (currently in development). Also in the works is City of Demons, a modern-day “Twilight Zone”-style TV series for which Kong is planning on hiring women directors. “Isn’t it about time women are included in the mix?” she asks. “I’m scouting the Etheria directors; there’s is some great talent here.” Jackie Kong has always been a director ahead of her time; she feels now the world has finally caught up.
“Jackie Kong is a bad-ass,” says Festival Director Stacy Pippi Hammon. “When we talk about inspiration, it’s not just the films, but the attitudes that we look up to. Kong’s unflinching determination to tell the stories that she wants to tell is so affirming to so many women. Combined with her having directed some of the most iconic genre films of the 1980s, this attitude makes her stand out as someone we would love to honor. She’s punk rock.”
In addition, Etheria is proud to be hosting the world premiere of Jill Sixx’s latest horror short The Stylist starring Najarra Townsend. “Having a world premiere is awesome, but when it’s for such a shockingly good horror film like ‘The Stylist’, I get really excited,” says programmer Heidi Honeycutt.
Etheria Film Night is an annual showcase screening of a progressive slate of genre films directed by women for an audience including producers, managers, show runners, distributors, and genre fans. Women make exciting, provocative, entertaining, fantastic, and terrifying films. Etheria puts the women directors who make genre films and TV in front of the people who want to hire them. Past official selections have included films from directors Axelle Carolyn (Soulmate), Rose McGowan (Dawn), Karen Gillan (Coward), Chloe Okuno (Slut), and Amber Benson (SheVenge), among others.
Watch the trailer for Etheria Film Night 2016: https://vimeo.com/166445083
Watch the trailer for Jill Sixx’s The Stylist: https://www.youtube.com/watch?v=51Ije9_78Hs
Tickets: http://www.fandango.com/americancinemathequeattheaerotheatre_aacpd/theaterpage?date=6/11/2016
Official Website: www.etheriafilmnight.com