Drag Me to Hell – Blu-ray Review 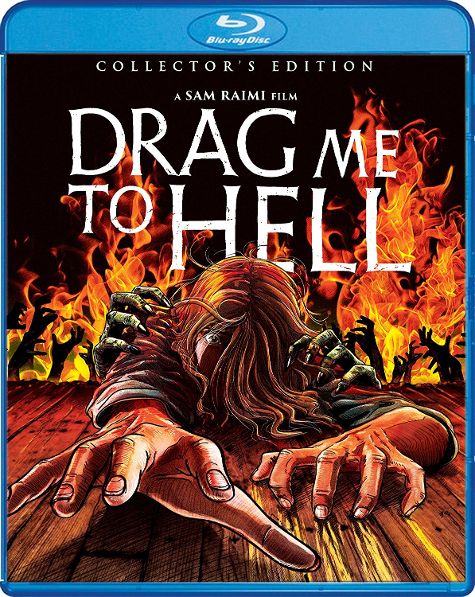 After the Spider-Man movies, this was horror fan-favorite director Sam Raimi’s big return to the horror genre. As such it had a ton of anticipation from the faithful and it was hyped up to all Hell (ha, get it). Then it came out and…I loved it. It was no Evil Dead, but what could be? But it was a solid Raimi trademark blend of humor and horror, of slapstick and splatshtick, something that succeeded at being both silly and scary, and oh yeah, it was dark as hell, too. Bonus. So now the always-awesome Scream Factory has given it the two-disc collector’s edition Blu-ray treatment. So how is it? Keep on reading and find out.

Christine Brown is an up-and-coming employee at the local bank. In order to impress her boss and hopefully land a promotion, she turns a deaf ear to an old woman’s pleas for help during hard times. In doing so she gets the woman’s ire, which normally would be no big deal, only this old lady is a gypsy, and if Hollywood taught me anything about the one thing gypsies excel at, it’s revenge. Now Christine is cursed to be dragged to hell in three days unless she can somehow break the hex.

That is the basic plot of this movie, but it does nothing to tell you how crazy, icky, and Sam Raimi-like this film truly is. There is a fly up the nose gag, dead bodies barfing up stuff all over faces, a cute kitty coming to a bad end, a talking goat, really badass shadow play, the world’s toughest hanky, Justin Long being dorky and likable, a lead in Alison Lohman sometimes doing bad things but still being likable, fountain-spray-like bloody noses, some great camera work/angles, routines right out of the Three Stooges, and more. The only thing that was missing was a cameo by Bruce Campbell and I’m sure he’s in there somewhere and I just missed him. It is Evil Dead light, but I am okay with that. In fact, I love it.

Let’s get to those tasty extras Scream Factory has given us on this two-disc set. Yes, I said two discs because first and foremost this has both the theatrical and unrated cuts of the film. That makes me happy. But before that it must be said that this movie looks amazing. It gets the full HD restoration from the 2K digital intermediate and the end result is impressive. Now for the theatrical cut goodies – there are about 34 minutes of vintage interviews with a bunch of people who made the film. But come on, “vintage?” The film is only…*looks it up on IMDb*…wow, it’s already nine years old. Damn. But still, I wouldn’t call that “vintage.” In addition to the interviews there is a production diary with many of the cast and crew, shot during the making of the movie that runs 35 minutes. There are also some TV spots and a theatrical trailer. Extras for the unrated version of the film include a brand-new interview with star Alison Lohman that is 12 minutes long, a new interview with Lorna Raver who played the evil gypsy lady and that one is 16 minutes long, and there is a new interview with composer Christopher Young that lasts 17 minutes. Then there is the ever-present still gallery.

Drag Me to Hell is a great film in the classic Sam Raimi tradition. It’s gory, silly, scary, and fun. It’s a grade-A thrill ride that’s unrelenting, dark as hell, and I love it for that. I easily and highly recommend this movie, and this new Scream Factory set is simply gorgeous to watch. So yeah, it’s a must-get, so be sure to get it when it comes out February 13th.