Book Review: UNDER A RAVEN’S WING 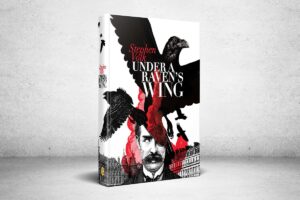 The dust jacket synopsizes Under a Raven’s Wing in one pithy sentence: “The Apprenticeship of Sherlock Holmes.”

It’s a mystery! But, wait! The cases are supernaturally laced!

This review will be intentionally cryptic, as befits both the mysterious and eerie. Personally, I abhor reveals of the juicy bits of a fictional book (or film!). Anticipation and surprise go hand in hand with excitement. I am going on the assumption that you, gentle reader, might just feel the same way. I shall honor the ‘synopsis’ and skip telling details. I refuse to cheat you—you clue-hunting, inquisitive supernatural-leaning book lover—of the exquisite experience that will unfold between the covers of this volume. However, I can offer clues.

Clue 1: I can tell you this: Under a Raven’s Wing brings together C. Auguste Dupin, the detective Edgar Allan Poe created, and Sherlock Holmes, the fictional detective Arthur Conan Doyle created. The former appeared in print during the 1840s. The latter appeared in print between 1887 and 1905. Like a question in a test to gauge intelligence, you may wonder what in the hell do these two worlds of supernatural and mystery writing have in common? And yet, this book brings them together seamlessly, and realistically. To discover this clever blend, you must put your trust in the author, a mastermind who has created a fresh and refreshing vision, both credible and outstanding. In other words, the answer is in the book. However, I can offer a few more clues.

Clue 2: I should tell you this: The volume is composed of several previously-published novellas and two new novellas, all of a piece, forming an overarching story. Poe’s supernatural and mystery tales blend flawlessly with Sir Arthur Conan Doyle’s Sherlockian-style of detection, which, by the way, is based on Poe’s idea of ratiocination: deduction; the process of logical reasoning.

Clue 3: I will also give you this: These are the titles of the novellas, from which clever you can likely deduce what many of the cases might be about:

The Comfort of the Seine

The Lunacy of Celestine Blot

Father of the Man

The Language of Terror

The Mercy of the Night

Clue 4: Because you’re an insightful reader, you will already know this: Poe is considered the father of the modern detective story. Conan Doyle wrote that he would not likely have penned the Sherlock Holmes stories without the inspiration of Poe’s ground-breaking tales: “The Murders in the Rue Morgue”; “The Mystery of Marie Roget”; “The Purloined Letter”, all featuring the detective C. Auguste Dupin.

Clue 5: Here’s another tidbit: These novellas are sequential, presented as missives received or sent by retired Scotland Yard Inspector Lestrade, who you will no doubt recall from many of the Sherlock Holmes stories. And more, the writing style of these tales cleverly mimics the vernacular of 19th-century literature, making this a smart and fun read for those who love the lushness of that era’s fiction.

Clue 6: What I can assure you of is this: Bafta winner Stephen Volk has been writing for film, TV, and print for quite some time and has his craft down pat. As a scriptwriter, his film and TV work includes: Ken Russell’s Gothic; Ghostwatch; Superstition; Afterlife; The Awakening, and six more. As a fiction writer, he has penned eight books, including the beautifully-written The Dark Masters Trilogy, that blends known entities featured as main characters within three fictionalized stories: “Whitstable” (beloved actor Peter Cushing); “Leytonstone” (renowned director Alfred Hitchcock); Netherwood (prolific Brit supernatural writer Dennis Wheatley pitted against the infamous Aleister Crowley). Needless to say, but I’ll say it anyway, an imaginative work like Under a Raven’s Wing by such a careful-with-syntax and no-holes-plot writer leaves a reader like you in excellent hands.

Clue 7: Finally, I will verify the following: You cannot go wrong with a Stephen Volk book, film, or TV series. Under a Raven’s Wing is a joy to read. Mysterious and eerie, the characters and their relationships thoroughly engage within a large plot crammed with unique surprises, not the least of which is the solidly brilliant premise on which this fiction is based. And then there is the perfect, unanticipated climax.