Blu-ray Review: ANYTHING FOR JACKSON 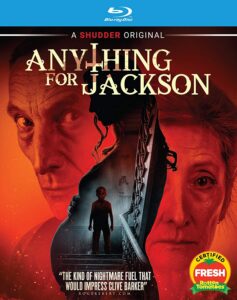 More movies from RLJE Films and Shudder, who are doing a great job sharing their streaming library with horror fans that, for some reason, don’t have the horror streaming service. This is their latest Blu-ray release, coming out June 15th, but should you add it to your home horror library? Well, grab your Big Book o’ Evil™, make a deal with the devil, and let’s find out.

There is a nice elderly couple living in a nice neighborhood, but unfortunately something not very nice happens to them that ends with the loss of their young grandson, whom they loved very much. So how do you deal with all that grief? Well, you join a Satanic cult, buy an infamous book of black magic, kidnap a pregnant neighbor, tie her to a bed, and plan to put Jackson’s soul into the unborn baby. Naturally, but of course, you might feel real bad about doing that, not that your feelings or anything will stop you. Not even the people who die or the ghosts who come to haunt you.

The story has a simple setup, but it is told so very well. Despite what they are doing, the kidnapping couple are both really sympathetic. I liked them a lot, and their practical necessity of turning to the devil to solve their problem. I love the woman who is kidnapped, who never becomes just a crying victim. She’s not a Superwoman who breaks the chains and kicks butt, but she always strives to stay in control and get out of the horrible situation she’s in. I even like the mostly comic relief Satanic oddball the couple enlist to help complete the ceremony. As for that comedy, there are more than a few moments in here that had me laughing, but it does that very well and never fully turns into a horror-comedy. No, it’s a horror movie through and through and at that, it really succeeds. It has some effective jump scares, good creeping dread, and even some gore gags. It really has a little bit of everything that should appeal to a whole lot of people.

Okay, let’s get to the extras on this new Blu-ray disc from RLJE Films. There, wasn’t that special? Yes, there are no, none, zip, zero, nada special features on this disc, and you know what, RLJE, that’s inexcusable. This is a good movie. No, it is a damn good movie, it deserves more of an effort than that on your part. Come on, no one involved with this wanted to talk about it? There’s no behind the scenes footage in an age where everyone carries a very portable device capable of shooting video? You couldn’t even dig up the trailer? Really? Really, really? For shame.

Anything for Jackson is a great little gem of a film, but sadly this Blu-ray is as bare bones as it gets. For that reason, if you have Shudder or can watch this in any other way, I must suggest you do that. Only if you don’t have the horror streaming service, other access to this film, or are an obsessive collector can I recommend this Blu-ray. This was one of my Top 10 Horror Films of last year, and its Blu-ray release deserved better.