Behind the Mask: The Rise of Leslie Vernon – Blu-ray Review 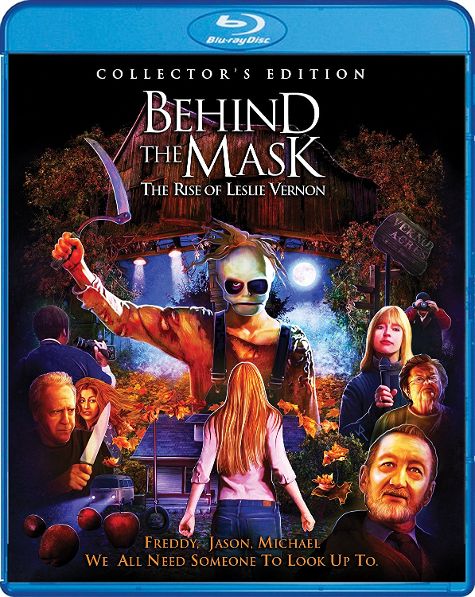 2006 gave us this horror/comedy shot as a mockumentary. It had a few cameos and secondary parts played by many horror favorites such as Kane Hodder, Zelda Rubinstein, and Robert Englund, and it referenced a number of 80s slasher classics, yet it still slipped under the radar of a lot of people. Though it should be said that the vast majority of those who saw it ended up loving it. It garnered a loyal cut following, has been mentioned Easter-egg-like in a number of other films, and spawned a comic book series, but failed to get a sequel off the ground. It has been a weird, wild trip for this film, and now it gets the Collector’s Edition Blu-ray treatment from the always awesome Scream Factory. Is it worth a get? Well, grab your mask, sabotage any weapon that can be used against you, be sure to train that cardio, and let’s find out.

The film is set in a world where famous movie slasher villains like Jason, Michael, and even the dream demon Freddy, are real. Leslie Vernon is a young man with hopes and dreams to one day add his name to that legendary pantheon of evil. Yes, he’s a regular guy who aspired to be a slasher killer. To this end he is stalking women, looking for his perfect final girl, setting up the scene of the slaughter (and rigging it in his favor with trick weapons, sealing up escape routes, etc.), and is training for his big debut every day. Leslie even has his own “Ahab” in the form of a driven-to-the-point-of-madness foe that is determined to bring him down. He has even invited along a small documentary film crew to film all his preparations and even the Big Night. Yes, they are to film him murdering some teens for real and not interfere in any way. In doing so they will become accomplices to the slaughter by their silence and inaction in not warning the chosen victims. Talk about a moral dilemma between doing what’s right vs professional documentarian detachment.

As you can no doubt see, Behind the Mask is a wonderfully Meta commentary on slasher horror films. It’s not an out-and-out spoof, it plays everything straight and is all the better for doing that. It doesn’t laugh at, but with, horror fans on many of the tropes of stalk and slash flicks, and I love it for that. It is also the rare horror/comedy that has more than a few creepy or tense scenes in it. Most such movies go heavy on the comedy and completely forget about the horror. Not Behind the Mask. It is very well directed by a first-time director and the acting is all top notch. Robert Englund as the “Ahab” and Angela Goethals as the final girl are wonderful, but the real star of the show, the one who carries most of this film and does so superbly, is Nathan Baesel as the killer in training, Leslie Vernon. He is captivating, funny, and frightening all at once.

Let’s get to those special features Scream Factory has put on this disc for us. First and foremost there is a director’s commentary track with director Scott Glosserman, and two other notable horror directors who are really big fans of the film: Adam Green and Joe Lynch. Then there is also a cast commentary with actors Nathan Baesel, Angela Goethals, Ben Pace, and Britain Spellings. Next there is a retrospective featurette that runs just under a half hour, a six-minute look at the comic book that was made about the movie, and a 32-minute making-of featurette that was filmed on set as the feature was being made. There is a six-minute collection of casting videos, a collection of deleted and extended scenes, and the always ubiquitous trailer. All together you have a nice collection of extras for this film.

Behind the Mask: The Rise of Leslie Vernon is a great film and it’s criminal that no sequel has ever come out for it, and yet tons and tons of insipid pap come out every year. If you are a slasher fan, a horror fan, a comedy fan, or any combination of the three, you will like this movie. Maybe you’ll even join the cult, like me, and end up even loving it. This is a must-have movie and yeah, it is highly recommended by me. Get it.