An Interview with Priya Sharma, Author of ‘Fabulous Beasts’ 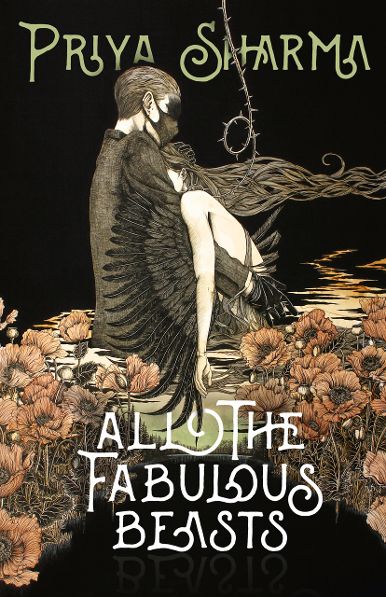 “Fabulous Beasts” is a fairytale that has magically shape-shifted into the modern day. In doing so, it trades castles for tower blocks and fragile princesses for girls from ’round here, but it retains the presence of magic and a struggle against destiny.  While the narrative’s timeline coils and twists, gradually revealing our protagonist’s hidden layers, the family relationships prove inescapable.  Ultimately, this story wrestles with timeless questions of identity and transformation.  In doing so, it serves as an excellent entry point into Sharma’s recurring themes of the “beautiful ugly” and, of course, the “fabulous beast.”

If you haven’t read “Fabulous Beasts” yet, now is the time to do it, because SPOILERS FOLLOW.

Hellnotes:  Let’s start with the genesis of this tale (Biblical/snake puns somewhat intended):  What was the original inspiration for this story? In particular, the different elements – the family dynamics likened to decaying line of “princesses” and kings; the setting of the tower blocks and crumbling mansion; the visceral descriptions of shape-shifting during moments of emotional trauma – are all so striking on their own, I’m curious as to which came first and how they developed with one another.  What was your process in working on this story?

Priya Sharma: I was asked for an original fairy tale for an anthology and this was one of the ideas I started to work on for it. I wanted to put standard tropes into a modern day gritty setting. At the time I found a charming children’s book about princesses. It wasn’t a story but a series of unusual character sketches that set me thinking on the nature of princesses.

When the fairy godmother and prince charming entered stage left, my princesses became dull and lifeless. Nobody would charge in to save them in real life. They would have to save themselves. My abandoned notes had Lola marching into Kenny’s lair to save Tallulah, but it stopped there.

It was only when a friend told me an urban myth from the housing association where they worked that I put the two ideas together to make sparks. It was about a house where a corpse was found with fang marks on its neck. I’m terrified by snakes but researching them made me realise that they’re fascinating creatures.

HN:   One of the themes that this story explores is the shifting of identities through labels.  Most clearly, the identities that Lola and Tallulah assume as Eliza and Georgia allow others to view them as something other than the weird cousins from ‘round here.  However, this same idea develops through Lola’s mother Kath, who Kenny calls “Mouse,” which changes her from the tough single mother we see early on into something that Kenny could “swallow . . . whole” or “crush.”  The only two members of the family without other names are Kenny – who is comfortable enough with his singular vileness that he doesn’t desire to change – and Ami –who is all surface, neither special nor particularly aware.

How do you see this theme of identity developing throughout the story, and how do the shifts in assumed identity work with reclaiming labels like “monster?”  What kind of considerations might readers take into teasing out the ramifications of the changes that characters either have forced on them (Kath/Mouse) or willingly accept (Lola/Eliza and Tallulah/Georgia)?

PS: I saw their identities as layers or masks. Mouse was an identity forced on Kath to keep her weak. I wanted the princesses to reinvent themselves, not just for their own safety, but their sanity. Their aliases allowed them to grow into the lives they wanted, even though Lola finds their past harder to escape.

I think reading is a dynamic process. I love that readers will bring their own ideas to a story, which will make their own reading of the story unique.

HN:  Tangentially related to the above, I have to know if Eliza/Lola’s names are nods to Pygmalion and Lolita, respectively?  If so, were their other name resonances hidden in the story, like maybe Kath and Mouse?

Names have power. People make assumptions about you based on names. About your colour, class, and cultural identity. There are studies devoted to names on job applications and that person’s prospects. Nicknames are equally important – whether we’re given them or choose them for ourselves.

HN:  I particularly love when narrative structures and content work together.  Here, rather than using a single framing device at the beginning and end, the story threads in and out of the present-tense narrative and the past-tense accounts of Lola’s life with Tallulah, Kath, and Kenny. This has given a number of readers the impression of snakes, coiling around each other. Was this an intentional effect? How did you go about deciding on how to structure this story and what was the process like in incorporating that?

PS: I have a very inefficient way of writing, but it works for me. I get down key scenes and ideas and then piece things together. It’s like building up a patchwork but I like this method because it gives room for ideas to grow. I surprise myself that way.

It served me well for “Fabulous Beasts” because I wrote the key scenes on separate time lines, in parallel, one informing the other. Mouse was an identity forced on Kath to keep her weak.

At one point I had both timelines printed on different coloured paper laid out on the lounge floor, so I could cut them up and piece them together. That way I could see the past/present balance and the details that needed to be stitched in to make them look seamless.

HN:  The ending is uplifting, providing Lola and Tallulah with a hard-earned happiness, even though the scars of the past remain.  In doing so, it neither washes away the lingering effects of Lola’s trauma nor does it minimize the unconventional and incestuous nature of the cousins’ relationship.  Still, by embracing their true selves after they “shed the disguises that are Georgia and Eliza, and then the skins that are Lola and Tallulah,” they find loving stability as mutually accepting “[f]abulous beasts.” Because happy endings for atypical couplings can seem rare in dark fiction, I’m curious if there were there other endings that you considered?  How did this one develop?

PS: I liked the uncertainty throughout of whether Georgia was Tallulah or not. I toyed with making her a different woman altogether, but I’d put Lola through too much not for her to be with the person she loved most in all the world.

I also thought the reader could do with a break too!

HN:  Your upcoming debut collection from Undertow Publications will be titled All the Fabulous Beasts, a clear nod to this story but also more encompassing. What is it about the idea of “fabulous beasts” – those monstrous but glorious others and the jolie laide (“beautiful ugly”) of the world that also appear in stories like Egg and Pearls – that attracts you?  Do you find yourself returning to this theme in your works and, if so, what tools do you find within speculative fiction that facilitate this exploration?

PS: It’s because I’m monster myself. Speculative fiction allows my inner freak free reign. It allows the physical manifestation of everything I find ugly and beautiful in the world. And yes, it’s a definite thread that runs through my work.

HN:  Finally, for readers who are new to your work, which other story or stories of yours should they look for if they want to read something similar? What about if they want something completely different?

PS:  Mike Kelly, the editor of Undertow Publishing, selected stories that made All the Fabulous Beasts a cohesive collection. It contains stories like “Pearls” and “Egg” (which you can find online for free) as well as two new stories, “Small Town Stories” and “A Son of the Sea.” The latter is full of monsters and transformation.

There are loads of stories that didn’t make the cut that are very different. “Grave Goods” is a stone age horror myth (Albedo One 46, reprinted in The Year’s Best Dark Fantasy & Horror: 2017, Ed. Paula Guran).  “Mercury” from a collection of Alice in Wonderland-inspired stories (Mad Hatters and March Hares, Ed. Ellen Datlow). “Needlepoint” is a historical fantasy/horror set in a pseudo-Tudor England (Interzone 242). If you like Greek myth retellings, try “Thesea and Astaurius” (Interzone 246).

Priya Sharma is a doctor from the UK who also writes short fiction. Her work has appeared in Interzone, Black Static, Albedo one and Tor.com, among others. She’s been anthologised in various annual Best of anthologies by editors like Ellen Datlow, Paula Guran, Jonathan Strahan, and Johnny Mains.  Her story “Fabulous Beasts” was on the Shirley Jackson Award shortlist and won a British Fantasy Award.

Find out more about Priya Sharma’s debut collection All the Fabulous Beasts here: http://www.undertowbooks.com/category/all-the-fabulous-beasts/ or www.facebook.com/AllTheFabulousBeasts/ 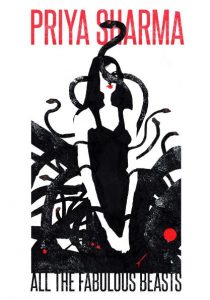