An Interview with Philip Fracassi, Author of ‘Shiloh’ 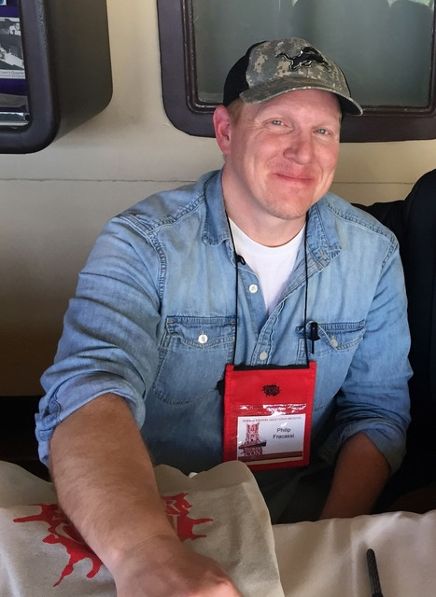 HELLNOTES:  For readers who don’t know, your newest novella SHILOH (Lovecraft eZine Press) follows a Confederate soldier and his brother over two days of the Battle of Shiloh in April 1862. Although the war presents its own visceral horror, things take a turn for the strange when supernatural figures begin to appear on the battlefield. Let’s start at the beginning then, with where did you get the idea for SHILOH?  Has the Civil War always been an area of interest for you, or did the concept for this begin somewhere else?

PHILIP FRACASSI:  A few years ago I was researching an idea for a screenplay and came across this nutty article about Civil War soldiers whose injuries turned a glowing green during battle. Not only that but the injuries were healing faster than a normal injury. It became known as “Angel Glow” because they thought it a miracle. It was later discovered – about a hundred years after the fact – that what they were experiencing was the result of a bacteria carried by insects that gave the wounds a phosphorescent green glow, and did in fact help heal cells. Crazy but true. Anyway, I went from there.

HN:  In addition to your vivid prose, one of the elements that make SHILOH so gripping is the level of period detail. From the troops maneuvering across the battlefield to the equipment carried and artillery fired, the attention to world building (or recreating) helps bring the story to life. What kind of research did you do for Shiloh?  Was there anything you learned while doing so that surprised you?

PF: I did an absolute ton of research. It’ll be a long time before I write another period piece! I mostly read first-hand accounts of men that were there, because I was more interested in the human experience and eyewitness accounts, than I was the military aspects or the broader strategic concerns. The most interesting thing I learned was that Ambrose Bierce – the great horror writer and journalist who mysteriously disappeared in Mexico in his later years – was at the battle and actually wrote a stirring account of it (he was on the side of the North). The essay is called “Shiloh” and is available online if interested.

HN: We don’t often see supernatural horror or the Weird set against the backdrop large-scale military conflict. Instead, war narratives seem to touch more on existential or body horror, as if physical action were somehow antithetical to more uncanny experience. However, the supernatural and the Weird tend to operate where people can become isolated, which, as SHILOH shows, can happen both physically and mentally during in battle. Were there any particular sources or other fictional works that you drew on or referred to in melding these areas?

PF: No, this wasn’t inspired by anything other than the strangeness of the “Angel Glow” phenomenon. That said, the setting intrigued me because what I like to do in my stories is take Ingredient A and mix it with Ingredient B to come up with something that hopefully reads as fresh. I’m a big fan of mash-up genre pieces, both in literature and in other mediums, so it was fun for me to take a historical war story and combine it with supernatural horror. To make it work you have to let both Ingredients have their say, which is why for the first part of the story it’s all about the horror of the battle, and the supernatural stuff comes in later to take a nasty bow.

HN:  You routinely work with variety of story lengths and formats, including many short stories and several novellas. Do you approach these as different beasts from the very outset, or do you just begin working on a story and let it go where it will?  At what point did you realize what shape SHILOH was going to take, both in length and the structural division between the days of the battle?

PF:  I used to be a lot better at pre-determining story lengths! It seems lately none of my stories come in at the word count I initially expect. But for the most part I go into a story thinking that it’s a short story (3500-7500 words), a longer piece (7500-12500 words), or a novella (15000-25000 words). I do write differently for each of these lengths because if it’s short I know I only have so much room to work, so less description or more streamlined action etc. With SHILOH, I was honestly thinking it was going to be more in the 20-25k range, but ended up a lot shorter (I think it’s around 18k). But I just finished another piece that I had planned on being no more than 7500 words, and it ran twice that length. So who knows? The story calls the shots, I’m just the mailman.

In regards to the structure, breaking it up like that was always the intention. I knew it was going to be an aggressive piece of fiction, and I wanted there to be moments for the reader to breathe and reflect before I cranked up the carnage once more. Plus it makes it easier for the reader to track the timing of events, which I think, ultimately, makes for a more satisfying experience.

HN: Without getting in to spoilers, one of the things that I note in your fiction is how it plays at the boundaries between what is generally considered “horror” and “the Weird.”  Leaving aside that these terms are fuzzy, these boundaries sometimes materialize in works like yours where there are a series of concrete events — clear lines of plot development and even an actual ending — but the explanations for the events are incomplete (whether due to the narrator’s partial lens or humanity’s limits of comprehension), which leaves the meanings swirling in that inexplicable region of the Weird. When you’re writing, are you focused of that tension between explanation and ambiguity?  If so, do you find yourself leaning into the unexplained or dialing it back as you revise?

PF: Put simply, I like the events that transpire with the characters to be clear. I don’t want the reader to feel jipped about what occurs with the characters I’m asking them to invest in. That said, I also don’t feel that readers necessarily want all the “whys” and “whos” of everything. The point of supernatural is that it’s somewhat beyond our understanding, beyond human comprehension. That’s what makes it supernatural, and that’s what makes it fun, right? So I’m (usually) going to take my characters from Point A to Point B, and you’re gonna know what happens to them. But as far as the elements that push them, or change them or destroy them… well, sometimes those things are best left to the imagination. “We fear what we do not understand” is a rule I rely on heavily.

HN:  I wonder, too, about the interplay of that with your approach to developing underlying themes. Beneath the ripping yarn in SHILOH, there is a subtext in which I could see the possible edges of certain readings that implicate current events, political tribalization, and other issues. However, while some of us may read into the text in multiple ways, that is mainly possible because of the ambiguity discussed above. Is that, too, something that you consider when writing?  To that end, do you consider that kind of ambiguity that may obscure the authorial intent – but open up reader interpretations – a feature or a bug in the Weird and/or horror?

PF:  I think readers are free to interpret a story any way they choose. Here’s the thing: once that story leaves my hands, it changes ownership. It becomes (in a philosophical sense) the property of each and every person who reads it. Everyone is unique, and everyone may interpret things a slightly different way, or perhaps the events of a story mean something to them that I never intended, but that doesn’t make it any less true.

I don’t worry too much about authorial intent other than the fact that I want folks to enjoy the work, to be entertained and hopefully feel something that stirs them up inside – whether it’s fear or sadness or joy or whatever. Beyond that, I’d invite readers to write between the lines and make the story theirs, to let it say what they would like it to say. To me, that just means it resonates, and that they were invested. That’s all I can ask for.

HN:  Finally, what’s coming up on your horizon? Not just what’s projects are coming out soon, but also what ideas are you playing with that maybe haven’t been worked out yet – can you give us something concrete as well as something abstract to anticipate?

PF:  Concrete: I just turned in a movie script that is in early-early-early stages of development called OBSERVE. It’ll be directed by Philip Gelatt, who just directed the Laird Barron adaption THEY REMAIN to much acclaim. I’m very excited about that project and hope it gets some traction in the upcoming months. I also have a story in the upcoming BEST HORROR OF THE YEAR VOLUME TEN, and a couple other anthologies that have not been announced. I have a novella called OVERNIGHT coming in June from Unnerving Press, and another novella called THE WHEEL coming in early 2019 from Cemetery Dance Publications.

Abstract: I have a couple ideas I want to flesh out – one is a side-sequel to my novella FRAGILE DREAMS, which essentially gives the account of what happened to Matthew’s (the protagonist) parents while he was stuck under a building. And I’ve started a story about a Vietnam vet and a dog who battle time-traveling monsters, and another that’s a ghost story that’s based on personal experience, and many, many others (like acorns spilled along the ground are my insane ideas).

Other than the stories, I’m working right now on a sorta top-secret television series with a good friend and great writer, and that’s all I can say about that right now. I’m also working on a novel, which is being looked at by some publishers, and hoping to find a home for a second story collection before the end of the year, if I can swing it. Ultimately, all I can do is work hard, keep my nose to the grindstone, and hope things fall my way. Hard work creates opportunity, or so I like to believe. And I’m always chomping at the bit for new opportunities.

Philip Fracassi is an author and screenwriter.

His collection of stories, Behold the Void, is available in ebook, paperback, audiobook, and hardcover. His current novellas include Shiloh, Sacculina, and Fragile Dreams.

His stories have appeared in multiple magazines and anthologies, including The Best Horror of the Year Volume Ten. His work has been reviewed by The New York Times, Rue Morgue Magazine, LOCUS Magazine, and others.

Philip lives with his family in Los Angeles, California.