An Interview with Danger Slater, Author of He Digs a Hole 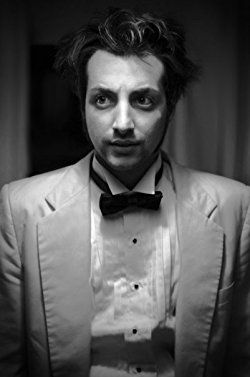 Today we’re joined by Danger Slater – Wonderland Award-winning novelist and self-proclaimed world’s most flammable author – to discuss his new novel, He Digs a Hole (available February 14, 2018).  We discuss influences, the mix of horror and Bizarro, and just what kind of household items are good substitutes for hands.

Hellnotes:  Let’s start at the beginning:  Although the novel’s back cover synopsis is tantalizingly vague, what else can you tell us about He Digs a Hole?  Without giving up too much, what was the – forgive the pun – seed of inspiration?

DANGER SLATER: The book is about a guy who wakes up one night and decides to saw off his hands and replace them with gardening tools so he can dig an impossibly deep hole in his backyard. Inspiration-wise, I wanted to write a book about unhappiness, and obsession, and relationships, both between the two main characters, and between I (the writer) and art. Digging a hole for no reason is a Sisyphean task, one with no apparent end or no reward. A lot of what we do every day is Sisyphean. And so the main question the book is posing is – why do we do these things?

HN:  In the novel’s Acknowledgements, you thank the Midland branch of the Multnomah County Library in Portland, OR for providing you a place to work through the first, second, and third drafts of the book. What was your process like in writing the novel?  How did it come together over the various incarnations of drafts and edits?

DS: Yeah, I wrote this book in the library over the course of 8 months. I liked writing there because it’s quiet, there’s free wifi, and it’s dry/heated/air-conditioned. I find I work better when I leave the house to write, because then in my head I can be like “well I came here to do this thing and if I don’t do it then why did I come here?” It’s like going into the office, so to speak.

HN:  Although He Digs a Hole incorporates elements of horror – including body horror, unnatural forces, and an overall dark tone – your novels also operate along the edge of the Bizarro genre, examining everyday life through a distorted lens. As examples, He Digs a Hole examines suburban and approaching-midlife ennui, while your prior novels Puppetskin and I Will Rot Without You tackle growing up and relationships, respectively. What is it about Bizarro that draws you in, or is it a matter of being classified after the fact?  Do you find that it lets you do things that you couldn’t in other genres?

DS: A lot of people struggle to define Bizarro, but as far as I can tell, it’s really not that complicated. Is “weirdness” an element of your book in the same way “fear” or “dread” would be an element of a horror book? If the answer is yes, then congrats, you’ve written Bizarro. I don’t set out to write in genre specifically, but I do it by virtue of who I am and how I tell stories. The thing about Bizarro is that elements of weirdness can infiltrate any other genre you can think of. I think the term Bizarro was meant to be an umbrella or a catchall for all those disparate oddballs writing on the fringes, whose work never fit in with the rigidity of genre purists.

HN:  Speaking of Bizarro and horror, where do you come up with all your strange, upsetting ideas?  Do you ever gross yourself out while writing, and/or has there even a point where you just had to say “Nope. That’s too much.”?

DS: I usually start with a weird premise – in this case, what would happen if you started digging a hole and didn’t stop – and then I try to take that idea and explore every edge of it, both literally and metaphorically, before carrying through to its most extreme and absurd conclusion. That process often causes me to stop and be like “Is this too weird? Is this too gory? Is this too [whatever]?” But fuck it, I like weird and gory stuff, and I like seeing how far an idea can go, so the word ‘nope’ never really enters the equation.

HN:  Without spoiling anything, I think we can say that He Digs a Hole employs metatextual, fourth-wall breaking author intrusions to comment on and provide counterpoints to the narrative. Where did the idea for this stylistic element first come from and how did it develop?  Were there other sources or models that you drew from?  If it isn’t getting too personal, how close is the “authorial” intrusion to you as an actual author, as opposed to another layer of character?

DS: While to story itself is about a stagnant and failing marriage, my personal inspiration was more rooted in my relationship with the creation of art itself, which is kinda like a marriage in its own way. Structure-wise, as the plot is about layers of things under the ground, and about the layers of unhappiness the main characters suffer, but there’s also another layer of narrative on top that, one that tells the story of me as a writer – as in, I’m simultaneously telling you the plot of the book while examining the process of writing a book. I wanted to keep reminding people they were reading a book, and that all the horror, humor, and catharsis they feel is imaginary and real at the same time, because even the craziest art always comes from a very real place. Does that make sense?

HN:  Do you have a favorite line or passage from He Digs a Hole that you think will entice readers so much that they – like the shovel-handed main character – will be unable to resist its call to dig in?

It didn’t taste very good, but he swallowed it nonetheless. It traveled down his esophagus and into his stomach, where it germinated, inside of his body.

Then he started digging a hole in his backyard and he didn’t know why.

It was not a very deep hole.

No, not at first.

One day, this hole will be deep and wide and black and empty. One day, the edges of it will crumble apart like the crusts on an old birthday cake. One day, when this hungry earth can no longer suppress its own appetite and it’s finally forced to devour itself, you’ll look back at this moment – at the very first chapter of the book that you now hold in your hands – and know that here is where it all began.

This is the hole that will rebel against the sunshine.

This is the hole that will steal away the world in one apocalyptic gulp.

Look inside of it, if you dare!

Your gaze will fall into this hole and never come back out.”

HN: Where do you see your influences – not just for this book, but in general? Who are some of your literary forebears? Beyond that, however, who (or what) are your influences/preoccupations/etc. from the larger world?

DS: Literary-wise, my biggest influences are people like Kurt Vonnegut, Tom Robbins, Margaret Atwood, Carlton Mellick III – artists with unique visions and strong voices. I love horror movies (obviously), but especially body horror stuff like The Thing or Videodrome. I saw The Shape of Water recently. I thought it was amazing. In both story and aesthetic, it felt like it was made just for me. More movies should try to be like that.

DS: Finishing up another novel as we speak that takes place on the same street as He Digs a Hole with some returning characters, although I wouldn’t call it a sequel because there’s no continuity between the novels. My editor John Skipp (Fungasm Press) wants me to put together some short form stuff for him, too, so I’m also working on a story/novella collection.

HN:  I lied. That wasn’t the final question. Here it is:  If your hands were cut off, what two implements would you attach to the stumps?  Depending on your answer, what do you think your new nickname would be?

DS: I think I’d want a bananas for hands. Bananas are my favorite food. I’m thinking of the convenience; when I get hungry, I can just peel my hand and eat them. You can call me BANANNANANANNANANANANANANANANANANANA HAND MAN.

Danger Slater is the world’s most flammable writer! He is the Wonderland Award winning author of I Will Rot Without You, Puppet Skin, and He Digs A Hole! He likes exclamation points! He is your favorite writer! You love him!