After the People Lights Have Gone Off – Book Review 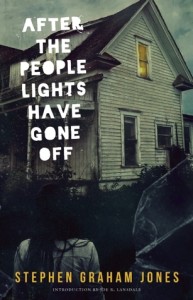 The latest collection from the prolific and multifaceted Stephen Graham Jones contains mainly reprints, with two original stories. If you’ve never read his work, it’s a great place to jump in, especially now that the Halloween season is once again upon us. His stories tend to have a timeless quality, but the ones collected here in particular are notably fitting for the onset of the cold, dark corners of the year.

In this book you’ll read about vampires, werewolves, spirits, aliens, murderers, mad science, and zombies, among other things. It’s obvious that Jones has an abiding love for horror, as most of these stories deal with long-standing genre tropes to some extent. That said, they’re far from typical and he doesn’t settle with simply rehashing what’s come before (unless he’s deconstructing something and reforming it into his own wild configuration).

“Welcome to the Reptile House” perhaps best exemplifies this, its cyclical structure weaving around seemingly disparate parts (supernatural abilities, tattoo culture, mortuary work), making its way to a conclusion that both comes as a shock and feels perfectly natural. It would be almost a disservice to mention the particular trope at play here. Suffice to say it’s quite possibly one of the best short stories dealing with it that you’re ever likely to read.

The title story takes the haunted house concept and again brings a unique spin to an age-old theme. It’s one of the more emotionally driven pieces in the collection (a quality that Jones does well with, which is no easy task considering the clipped prose style that characterizes his writing). In this story the characters are haunted by a past accident as much as the house itself is haunted, but make no mistake – It’s truly not a place you’d want to spend the night in.

“The Dead Are Not” takes an outsider’s perspective on the ritualistic nature of funerals, and explores the possibility of other ways to say goodbye, or possibly not have to say it at all (providing, of course, you’re privy to the secret words that must be spoken). If you could circumvent the great equalizer, what would be the cost? The chilling final words of this story may seem maddening in their ambiguity, but there’s more than enough there for readers to draw their own conclusions.

If there’s anything readers are likely to take issue with here, it is that ambiguity. Just as Jones isn’t content to go the typical route as far as subjects and plotting are concerned, his stories tend to leave a lot open to individual interpretation.

As far as the reading goes, the collection is a balanced mix of deeply imaginative stories, emotional weight, out-of-the-box structure, and prose that will at times leave you breathless. Top that off with Alban Fischer’s inspired book design, the eerie yet inviting cover art by George C. Cotronis, and Luke Spooner’s subtly sinister illustrations, and After the People Lights Have Gone Off is a sure bet for the kind of book you’ll want to keep coming back to over the years. Recommended.