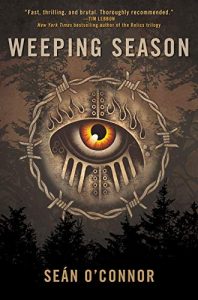 Irish author Seán O’Connor burst upon the horror scene in 2019 with the novella entitled The Mongrel, which was nominated for a Splatterpunk Award.

I often wonder what it would be like to go back in time and say, ‘I reviewed/just read the debut title from author Stephen King…or Dean R. Koontz…or Ramsey Campbell…or Peter Straub…or Anne Rice’… The opportunity to be there from ground zero with a work from a writer bound for stardom in their field is a great feather in the cap of a reader or reviewer—the chance to claim you were there from the start.  That is exactly how I felt while reading Weeping Season.

This novel kicks off 2020 as the one to beat in the horror/thriller genre, and I had to keep stopping to remind myself that this was an author just starting out on his professional writing career.  Weeping Season was impossible to put down, and the incredibly suspenseful and sometimes horrific tale played in my mind like an episode of Black Mirror—it’s quite simply that good.

O’Connor wastes no time, as the novel opens up with a scene that could have been channeled directly from someone’s nightmare.  A young man awakes screaming, with his cheek pressed firmly against cold, hard ground.  He quickly summizes that he is chained completely naked to a tree in the middle of a forest. Not long after he gains his wits, he hears the shouts of another person, this appearing to be a teenaged girl, also nude and bound to another tree not far from him.  The only things he is unable to gather are his name and how he got there.  Speaking to each other and attempting to work as a team, the two of them discover that a key which opens each of their locks can be found in the vicinity of the other person’s tree.  The only trouble is that, once freed, they have no idea what to do next.

Weeping Season is one of those stories where anything I might mention in this review would deprive readers of one of a myriad of revelations to be found inside of it.  I’ll just indicate that the two initial characters eventually meet up with a camp of other people in similar circumstances, each shaved bald and marked with a number on the back of their heads.  This novel is a revelation and, without putting too much pressure on Seán O’Connor, is hopefully just the start of a long career that the promise of this first full-length novel speaks to.