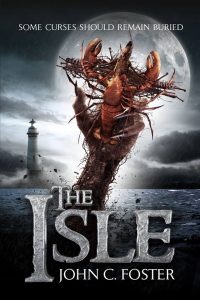 John C. Foster’s new novel The Isle is a two-fisted blast of hard-boiled horror noir. When disgraced U.S. Marshal Virgil Bone is press-ganged into retrieving a dead body from the isolated New England coastal island of the title, he expects an unpleasant task, but he doesn’t know the half of it. Stumbling into the middle of an insular village haunted by the secrets of an unspeakable past and seething generational tensions, Bone is in the wrong place at the wrong time when centuries of darkness threaten to erupt into violence. And lobsters. It might erupt in lobsters. A mile-a-minute thriller that blends ingredients of pulp noir and paperback horror into a wonderfully lurid and entertaining stew, The Isle is a delight.

Although the individual elements of The Isle will be familiar to fans of noir fiction or readers of a particular kind of visceral horror, there is a joy in seeing them come together in a new way.  The downtrodden lawman looking for redemption and the outsider who stumbles into a strange and isolated village are both familiar plots, but, by pairing them together, Foster makes Bone’s mission and the way it spirals out of control feel fresh. Although Bone’s intended quick trip is extended by a vicious murder that he feels compelled to investigate, revisiting tropes like, say, spooky villages, abandoned graveyards, deserted towns, and seaside caves take on a new luster when our guide is an in-over-his-head lawman struggling at first to find the truth and then to just find a way out. With ticking clocks in the form of incoming tides, upcoming festivals, an ancient tome, multiple murders, and a missing gun, there’s a delightful sense of pressure from every side.

That’s not to say that Foster merely combines old tropes into new forms; far from it. What is immediately striking about The Isle is the eponymous Isle itself and the mythology that Foster conjures up. Everything here feels salty and muddy, and from the “lobstermen” effigies that mimic crucifixes and rattle with children’s teeth to the threatening crustaceans themselves that lurk in the muck, readers will never look at a surf and turf platter or soft-shell crab the same. Foster also does enough work digging into the psyches of the key characters—including Marshal Bone, widow Hazel Milk, outcast Burden Ipswich, and even a historic flashback to the town’s origins—that they come across as real people rather than stock tropes. While readers might recognize echoes of the familiar in these characters, they will also find enough new wrinkles to be drawn along as the situation becomes dire.

Foster’s writing, too, will grip readers from the get-go. Although the closest descriptor would be “hard-boiled” a la the pulp detective stories, Foster’s prose never lapses into pastiche. He writes clear and vivid descriptions that not only capture the Isle’s strange and at time viscerally off-putting environment, but that carry with them the psychic weight of each character’s world view. The prose is solid without being dense; lush without tipping into baroque. Moreover, by employing a cinematic style that cuts between scenes and point-of-view characters within each chapter, Foster keeps a tight grip over the story’s place and the flow of information. The result is a novel that always feels like its barreling forward, even when we take a step back to learn more about the Isle’s history or Bone’s traumatic past.

Fans of genre literature will find The Isle to be a rewarding romp through (and beneath) a grotesquely gripping seaside town. As the island’s mystery unravel and its history of violence begins to bubble up from the crab-infested muck, Foster’s white-knuckle pacing and engagingly gruff characters will keep readers firmly in The Isle’s claws.