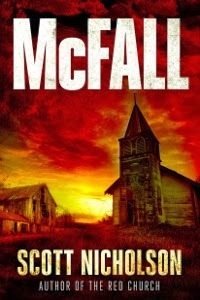 This is a sequel to Drummer Boy and The Red Church, though if like me you have not read either you can still enjoy this book.

A member of the villainous family that plagued the previous novels, the McFall of the title, has come to claim the land that belongs to him. But Larkin McFall is different from his predecessors, subtle, suave, a property developer who draws people to him through the promise of work and big profits. The infamous Red Church, in which his predecessor worked so much evil, he has destroyed by fire to make way for a high class development – though what is found within its burned out embers gives a dark glimpse that all is not as he makes it out to be.

Behind all the bon homie and the modern aspects of his wealth and power lurks an ancient evil, well hidden by his designer clothes and his apparent desire to help people out. The local sheriff, nearing retirement and still raw from what happened years ago when a different McFall lived locally, is certain about this, even though he can’t prove it. But bodies turn up and ghosts from the past are never very far away.

The main protagonists, looking forward to college, are Ronnie Day and Bobby Eldreth, best friends through thick and thin. Ronnie has a reputation for finding dead bodies – a reputation he would rather do without – while Bobby shines as the star baseball player for their high school team with hopes of turning professional if he is lucky enough to be spotted by a scout from a major team. Little by little, Larkin McFall comes into their lives, manipulating them both in what he likes to call a game within a game. Ronnie tries to resist, but he is outclassed. Bobbie, dogged by an over-ambitious father who sees him as a meal ticket to a better life, is easier prey.

This is an engrossing novel, with a fine cast of well developed characters, set within a realistic milleau. The sinister developments are skilfully introduced with cumulative ease as McFall spins his spider’s web around  the township.

This is a first class thriller, whose supernatural elements are never crudely overdone. Deaths, intrigues, and betrayals, all play their part in a story that quickly sucks you in with consummate ease. A thoroughly modern, thoroughly intriguing horror novel.