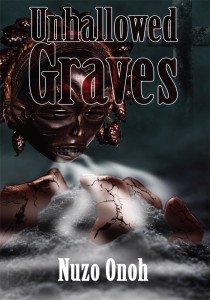 My first introduction to Nuzo Onoh’s work was here on Hellnotes. I read and reviewed her short story collection, The Reluctant Dead.

Onoh is a British writer of African heritage from the Igbo tribe in what was formerly known as The Republic of Biafra. During their civil war with Nigeria, Onoh had several family members die in the conflict. That war had a great impact on her writing style. For people whose lives have become full of such brutality and carnage, their stories become full of tales about death and the afterlife.

Her work helps us as readers to realize there isn’t such a divide between cultures when it comes to what terrifies us. Horror is primal. Fear is the core of what makes us humans. It is so deeply wired into what we are that it can transcend cultural norms by merging the familiar with the unknown. The reader gets to take a deep draught of local Nigerian/Igbo culture and practices while experiencing these stories.

Unhallowed Graves is a well-paced read, soaked in folklore and dotted with unexpected twists. (And dare I say it: I enjoyed it even more than The Reluctant Dead.) These stories are of vengeance and the power of the dead to affect the living from beyond the grave. And they use this ability to the fullest. Onoh also doesn’t shy away from the gritty, nasty details when creating trauma to put her characters through. (Two words: corpse water *shudders*)

The Igbo culture, like many others around the world, has a strong oral storytelling tradition. I’m pleased Onoh has been able to capture these tales and tell them in her straight-no-chaser style so they are not lost to time. Onoh makes it known that Africa is a culture that accepts the supernatural as normal. Specifically ancestor visitations, re-incarnation, malevolent spirits, possessions and hauntings.

I find it refreshing to read a horror tale where all of the characters are aware of what brings evil to your doorstep. For me, that makes a writer have to push and stretch their creativity and plot line in order to deliver the fearful scares more so than the story where one person is a non-believer. Although if you enjoy cautionary tales, Onoh has crafted one of those as well. More on that later.

The Internet brings us news and trends in an instant and with books it is no different. When a writer makes a reference to Nike or McDonald’s few people will be unfamiliar with the terms. Likewise, it will take only a moment to search for the definition of an unfamiliar word should you choose to do so. Only occasionally do we run across words that have no results in a web search. In these rare instances, Onoh has efficiently worked in the English translation of the Igbo words into the storyline.

The three novellas in Unhallowed Graves are elegantly written horror. While there is a subtle hand crafting the stories, they do not shy away from visceral descriptions of violence and stomach-churning description. Unhallowed Graves is an example of the short form of horror packing a powerful punch.

A bit about each novella:

The Unclean: Beautifully tragic opening. My allegiances changed several times during the course of this tale. It is especially potent for women as the story is set in a society where a woman’s worth is only measured by her ability to provide her husband with sons to carry on the line. It is a real occurrence for many in the world. Reading about the lengths Desdemona goes to in order to procreate is heartbreaking.

Night Market (Oja-ale): This is the cautionary tale. An English man takes a high-ranking position in Nigeria and brings his wife along. Of course, he ignores the warnings of his driver and the other locals, allowing his wife’s cardigan to be stolen by…something. The story chronicles his deception and attempts to regain the item. But once something goes up for sale in the Night Market, the owner is never the same…

Our Bones Shall Rise Again: Inspired by a true story—the famous Igbo Landing hauntings of St. Simon’s Island, Georgia (if you’re unfamiliar, here’s a quick link to some information about the tragedy) where hundreds of men and women drowned themselves rather than be taken as slaves. In Onoh’s vision, we are given a beginning and an ending to this tragic story. Bones is full of male and female witchdoctors and their sorcery—attempts to preserve the characters’ way of life. Some may find this a difficult story to read as it shows the native tribe’s distrustful response to Westerners and their religions.

I appreciated that not all of the women in the story were physically beautiful. Onoh doesn’t hesitate to show women’s deformities, going so far as to celebrates them as positives in a culture where it is difficult for women to hold positions of power.