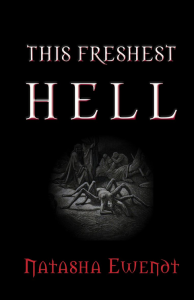 Natasha Ewendt’s first novel, This Freshest Hell (Lacuna Publishing 2013), is defined by growing pains.   Young outcasts Maggie and Lily struggle as they age from damaged teens to stunted adults and, eventually,  into something else entirely.  The novel itself, however, also struggles in its early chapters, only to develop admirable momentum and scope as it progresses, growing into something far more exciting and compelling.  By the end, readers will be eager to see Ms. Ewendt’s next stage of artistic development and the continuation of Lily and Maggie’s story in the teased sequel.

High school outcast Lily (aka “Death Lily” to her tormentors) is a perpetual outsider until she meets kindred spirit Maggie.  The girls form a fast friendship, bonding over mirrored childhood traumas – as well as a taste for philosophizing with teenaged, dime-store gravitas.  All is (comparatively) well until a Devil’s Night lark summons the demon-goddess Arachine, triggering a slow-burning curse that will – ten years later – offer the girls a choice between the death that at least one of them seems to desire and transformation into creatures of darkness. When fate finally catches up with them in the form of vampire brethren Orfeo, Lucien, and Marriett, the girls have to confront their new existence – and each other – or face a more permanent fate than death.

Although the novel has interesting ideas and some strong prose throughout, it struggles with pacing.  The first half of the book’s 240 pages are devoted solely to elaborating on Lily and Maggie’s relationship, punctuated only briefly with plot elements.  Furthermore, Ms. Ewendt presents most of the novel in dramatized scenes, rather than narrative summary, and as a result the first half of the book is a series of long stretches of dialogue that hop across hours, months, and even years without much in the way of context.  This leads to over-exposition and shoe-horned details (e.g., “Didn’t Kurt Cobain die like two years ago?”), but with so much dialogue between two characters with very similar exterior personae, Lily and Maggie sound much the same and don’t differentiate themselves until much later on.

However, the book gets much stronger as it goes on. When Maggie and Lily are split apart and, later, placed into conflict with one another, they become much more distinct and compelling.  The story really finds its footing once the decade-long curse finally comes to fruition, ending Maggie and Lily’s wheel-spinning and introducing some new blood (forgive the pun) in the form of their vampiric creators.  Ms. Ewendt has created an intriguing world for these characters:  distinct “brethren” of vampires descended from ancient god-demons, magic-wielding Atlanteans, interdimensional supernatural foes, and surprisingly complex musings on damnation and abuse just scratch the surface.  Each new element takes the story further and further into exciting territory, but where these could have easily sustained much more page-time, unfortunately, they must be introduced and rushed through.   A plot line involving the other supernaturals that could have easily been one-third or more of the book only receives thirty or so pages.  But what a thirty pages!

As the story’s scope expands, howeve, Ms. Ewendt finds the opportunity for more and more chances to show off her strong prose and a deepening understanding of the characters.  For instance, this book has its fair share of gruesome bits (these are vampires, after all), but scenes involving attempts to drink corpses’ blood or a description of vampiric healing as essentially breaking in reverse gave me the good kind of shivers.  More importantly, the more time that Maggie and Lily spend apart – and, not coincidentally, the more time Ms. Ewendt spends examining them through narrative techniques other than immediate dialogue and scene-presentation – the more they come into their own.  By the end, Lily and Maggie are distinct characters and their crucial actions in the final chapters feel organic and, most importantly, compelling.  Readers that stick with the novel will be rewarded with a well-earned gut-punch of an ending.

Overall, this book shows promise for what’s to come next – both in this story and is Ms. Ewendt’s development as a fiction writer.   Although it takes This Freshest Hell  a while to find its feet, it hits a full-on stride by the end and will hopefully hit the ground running in the next book.