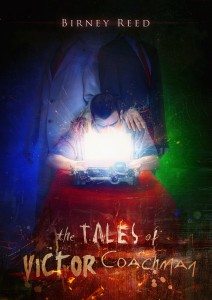 On October 28th, Bad Dream Entertainment, a Seattle-based publisher of horror and dark fiction, will enter the mass-market paperback fold with Birney Reed’s The Tales of Victor Coachman.  To make this leap with a single-author collection of previously unpublished work by a relative unknown is a bold move, but, unfortunately, the end product doesn’t quite live up to ambition behind it.

The Tales of Victor Coachman presents fourteen previously unpublished horror and light sci-fi stories from Ocala-based author Birney Reed.  Tent-poling these tales are three meta-fictional interludes which frame the other stories as the product of Mr. Coachman, a fabulously successful author/author-surrogate whose written words come true.  To further this conceit, several stories have epistolary news bulletins that follow their endings, as if to remind readers that these stories are indeed taking life.

This framing device shows its potential when Reed suggests that Coachman is an obstinate pawn that has managed to stymie a larger struggle between Good and Evil.  However, neither Coachman’s hardheadedness nor the ramifications of these stories coming to life are fully explored. While the Coachman-focused sections display some imaginative details – including a monstrously banal “agent” and a mostly successful narrative experiment in the shifting identities of Good and Evil – they never quite bring Coachman himself to life or explain the significance of his powers.

Overall, there is a strong sense of familiarity in the stories, most of which end with a comfortable, but predictable, Twilight Zone twist involving some comeuppance.  The characters, too, are ones that most readers will have seen before:  villains are mustache-twirlers, the heroes are almost too “edgy” (most notably the drug-addicted priest-cum-assassin for an Illuminati-esque cabal in “Yearbook”), and although many characters occupy morally grey areas, they are mostly flawed in instantly recognizable ways.  Some further revision or editorial guidance could have pushed these stories either deeper into the characters or further beyond the usual tropes to find new insights.

Reed’s talent is evident but unfocused.  There are strong moments and clear promise in individual stories, such as “H2o,” which succeeds by restricting its focus to an ice sculptor, his model, and their changing relationship as reflected in the statue he carves.  The first-person “Don’t Pull the Plug” nicely captures the addled voice of a man who becomes obsessed with testing the bon mot that killing is easy, but living with it is hard.  Further, the ghostly stranger and hidden secrets of “Footsteps in the Snow” create a compelling mystery in the first half of the story, while “Image isn’t Everything” ends with a real kicker of a final line.  While these show definite strength, focused revision on a few stories with an eye towards tightening up the prose and the craft issues would probably have netted stronger results than dividing the attention across the fourteen seeming works-in-progress collected here.

Finally, while this review is based on an ARC, there are many evident formatting and copyediting errors.  Most noticeably, the story names in the upper right-hand corner of the pages only match up with half of the stories on their first pages.  Some egregious typos have also made it through the proofing stages, including several instances where character names change for just a sentence, evident leftovers of earlier drafts or uncorrected errors.

While Bad Dream Entertainment’s commitment to new authors is admirable and there are pieces here that could be worked into strong additions to multi-author publications, it feels like Reed was spread too thin across fourteen stories and the technical problems in presentation on exacerbate that result.  Although this book reflects growing pains for both the author and the publisher, there’s definite promise here, so let’s hope that next time’s the charm.