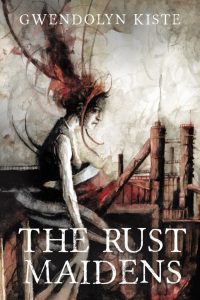 The Rust Maidens, the debut novel from acclaimed author Gwendolyn Kiste, is a melancholy but bracing look at how a dying piece of the American Dream clutches at life. Perpetually hounded by the decay, the delusional adherents of the Good Ol’ Days again and again throw their daughters into the maw of history to try and stave off change (or at least to have someone to blame) until their sins are made manifest by the titular Rust Maidens’ metamorphosis into creatures of metal and glass. Moving from her accomplished short dark fiction into long-form storytelling, Kiste’s first novel is part coming of age and part long-coming reckoning that interrogates the ways that American society turns its young women into monsters and then blames those same girls for it.

The novel takes place in Cleveland, Ohio, and its narrative shifts between the past of Summer 1980 and the novel’s “present” of about thirty years later. In 1980, narrator Phoebe Shaw is just graduating high school and longs to escape her dead-end life on Denton Street. Her neighbors think she’s trouble because in this de facto company town beneath the local steel mill’s ever-watchful eye of flame, Phoebe’s willful streak and plan to flee to college is tantamount to treason. However, when a mysterious body-altering disease infects five girls from her graduating class—including Phoebe’s cousin Jacqueline—Phoebe finds herself more deeply entwined with the afflicted “Rust Maidens” than anyone else in town. Now, as the adult Phoebe finally returns home thirty years later and only a few days ahead of the wrecking crew that is erasing her memories one by one, she must finally come to grips with what happened all those years ago and try to prevent it from happening again.

Readers of Kiste’s short fiction are already keen to her immense talents and will be pleased to find her evocative prose, her well-rounded characters, and her commitment to interrogating the societal expectations on girls and women on full display. Here, Kiste employs a metaphor-heavy and impressionistic style which alternates between keen personal insights and almost gentle narrative descriptions which serve as a layer of gauze over what could have otherwise been a cold incision or a ragged wound. As a result, the story both gives a clear sense of Phoebe’s interiority as the narrator, but still renders the external events in that dreamlike state between magic and memory. It’s a style that brings us a blunt self-report one moment, but the next delivers a lush description of the Rust Maiden’s open wounds that weep grey water and their pewter colored bones beneath their rust and glass skin. It reads at times as if the present day Phoebe is not telling a horror story or making a confession, but rather relaying a fairy tale of what might have happened in her youth when she saw the fate that Denton Street held for the other girls. At its best, Kiste’s writing operates on shifting planes between metaphor and magical realism, between a cautionary tale and coming to grips with reality. It never quite terrifies, but it often unsettles in the most unexpected and occasionally even luminous ways.

This approach of direct interority with dreamlike events is eminently fitting because Phoebe’s struggle to save the Rust Maidens is as much about her coming to terms with her own understanding of the stifling expectations that society has for young women as it is about the external events. In a sense, the real horror of this story is how emphatically non-horrific it is to everyone except for Phoebe. The girls’ families and neighbors are too worried about the possibility of the local steel mill closing to pay attention, then too embarrassed by the bad press, and finally too irrationally angry at the Rust Maidens to ever own up to how they’ve created a world in which their daughters literally turn to rust because they see no hope for escape from the dead-end lives that have been forced upon them. In fact, there’s a recurring conversation where Phoebe’s father says that her rustbucket Impala won’t make it to the end of the block and she retorts that it can make it to the stars, but the real sick joke is that the American Dream which is supposed to take everyone to the stars is the true broken down machine which won’t get them anywhere. Even when the Rust Maidens run away together, they only make it as far as the decrepit mansion at end of the block; even their monsterhood is defined by a lack of mobility.

Thematically, then, The Rust Maidens presents itself as a fairly direct metaphor: small town America’s social pressures force girls to either flee as outcasts or to wither into another rusted out pieces of junk when the factories close and the dreams decay. This stated directly once, but throughout the book the wonderful descriptions of the decay that surrounds Denton Street and the steel mill echo in the hauntingly beautiful body horror of the Rust Maidens’ transformation into metal-boned and glass-covered monsters. Moreover, the Rust Maidens are exemplars of the lack of options available to many women, e.g., one is an unwed teen mother pressured to keep a baby; one will work for her mother rather than go to school; one is a preacher’s daughter; one’s art isn’t taken seriously; one is in an abusive home that she feels she cannot leave. Phoebe is the one who got away because she literally left town, and her overall character journey is about coming to grips with what she did, what she could have done, and what she can do now that she is old enough to confront these truths.

But The Rust Maidens isn’t only about that. This is radioactive storytelling that hides at margins. It’s plutonic. It’s not a weapon until you realize that it is, and that revelation comes when the reader peers into those blank spots around the narrative and realizes that these Rust Maidens aren’t the only Rust Maidens. Instead, this story is about every Rust Maiden across the country and every other Phoebe who couldn’t save them.

Crucially, were it not for Phoebe inadvertently alerting a journalist to the Rust Maidens early on, they would have passed entirely unnoticed by the wider world. Their parents were hoping to ignore them, but even the response from the wider medical community, the government, and the outside world is only morbid curiosity or amounts to mere hand washing. When events come to a particular head during a massive storm that cuts through the Midwest towards Denton Street and Phoebe wonders if other people were hurt because of the events occurring in her town, she too misses that the only thing special about Cleveland is that people knew about the Rust Maidens there. America is full of Rust Maidens. They are women in Detroit, in Flint, in Allentown, in Buffalo, in Galveston that we’ll never hear about because those Rust Maidens don’t have a Phoebe to tell their story. They don’t have a Phoebe to fight for them and try to save them and, if all else fails, to remember them. They just fade away. And, as that realization settles in, Kiste’s novel digs deep enough to ensure that readers feel it in their bones.

Gwendolyn Kiste’s debut novel The Rust Maidens is a phantasmagorical slice of Americana in a long decline. Between the summer of 1980 when Cleveland’s steel mill finally closed and five local girls turned into beautiful monsters, and thirty years later when the only true witness returns to confront this legacy, The Rust Maidens takes a hard look at a fading American Dream. A sharp piece of American Gothic magical realism, softened by Kiste’s luxurious prose and illuminated by her genuine love for the monsters at its heart, this book is not to be missed.