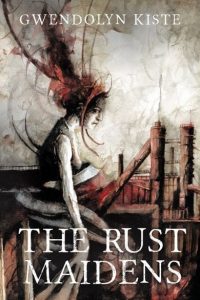 Pray for the Rust Maidens.

Gwendolyn Kiste’s work never ceases to amaze and fascinate. Her imagination seems limitless, if her impressive body of short stories is any indication. For her previous novel, Pretty Marys All in a Row, I had the distinct pleasure of providing a blurb. Her latest release, The Rust Maidens, is no different in its imaginative nature and splendid interweaving of the everyday with the uncanny. It’s a work of beauty and of horror, of nostalgia entwined with knowing you can’t go home again, but you must – this one last time.

Loving attention is paid to the details of Cleveland, not all of it kind, but it reads as true. A kind of truth that can only be told by a character who remembers the sweet and the bitter when it comes to their hometown. We are treated to a description of the city, and of Denton Street, by 46 year-old Phoebe Shaw as she returns home with trepidation, having lost little of the steely willingness to fight against authority that bubbled in her at 18, the summer of the Rust Maidens.

We flash back to the summer of 1980 when Phoebe and her best friend Jacqueline have just graduated high school. Their uncertain view of the future becomes shakier and more frightening, as several of the graduating girls, including Jacqueline, have begun to change. While their bodies morph into something unknown to the neighborhood or to medical science, those they love – parents, boyfriends, siblings – refuse to believe there is a problem. Because the rusting away of flesh, the morphing of keratin to glass, the leaking of dark water only affects girls. And the inhabitants of Denton Street are more than willing to turn away and hope this condition resolves itself. Even faced with brutal evidence of what is happening to their girls, they struggle to remain trapped in their own denial, while the girls continue to change, to become…

Only Phoebe, notorious local troublemaker and a friend of the girls, now colloquially called The Rust Maidens, attempts to help determine what is happening to these young women and try to stop it. Phoebe is herself hard-edged, already a steady drinker and suffering from a broken heart. Before the metamorphosis of the girls, her only wish was to leave Denton Street far behind. But she can’t fight an entire community alone.

The neighborhood is in turmoil over the girls, and the tumble of outsiders who flock to Denton Street for a look and perhaps a poke or prod at the Rust Maidens exacerbates the fray. Phoebe is surrounded by adults who want to profit from this transformation the girls are experiencing. Desperate, Phoebe tries to save them, from the metamorphosis, from the fear and hatred leeching from the local townspeople, and from the uncertainty of being taken away by government men as specimens.

However, the maidens themselves are silent about their transformation. They huddle together, secluding themselves, cloaking their communication in whispers, and their travel in secrecy. Not even Phoebe realizes that the maidens hold the key to saving the city or plunging it further into destruction and decay. As she begins to unravel their intent, the fear and shame of the Denton Street residents turns to suspicion and anger, finally exploding into a horrific action they cannot so easily hide.

Almost thirty years later, Phoebe is back. Age has changed her some – she is more likely to hold on to her secrets, not sharing with those who now want to know what happened that summer, in order to complete a story whose pages were torn out so long ago. But to her horror, girls are starting to change again. Wounds are appearing, flesh is opening, and Phoebe has to decide if she wants to remember the decision she made all those years ago.

Kiste’s horror isn’t an axe or a butcher’s knife. It’s a scalpel, cutting so fine and precise, you don’t feel the horror until it wells up to fill the cut. Urban decay, the closing of mills and factories, the demolition of a town following the mass exodus of its inhabitants creates a setting that is the ideal backdrop for the events of this novel. Her evocative word choice heightens the aura of desolation in this novel, providing a winsome horror that is hard to resist.

“The wind whispering its dark lies…”

“The giggle crackling from the end of the severed [phone] cord…”

I enjoy Kiste’s work so much because she doesn’t shy away from reflecting what is happening all too often in the world: apathy toward the plight of women and girls. The cover up of pain, the dismissal of their experience is a terrible reminder and a brutally accurate mirror of what is happening in the world around us.

“They’re exaggerating it for the attention…”

The Rust Maidens at its heart is a mystery, one that Phoebe holds the key to. It’s as much a coming-of-age story as it is a redemption arc for her and several of the characters. A theme I find in Kiste’s work is change and transformation, and allowing girls to become what they want to be, instead of forming themselves to a mold that doesn’t fit them. Yes, this is a horror story, but a touching, beautiful one that will linger in the mind of anyone who has known they are something different. Misunderstood, reviled, feared, but still worth existing.