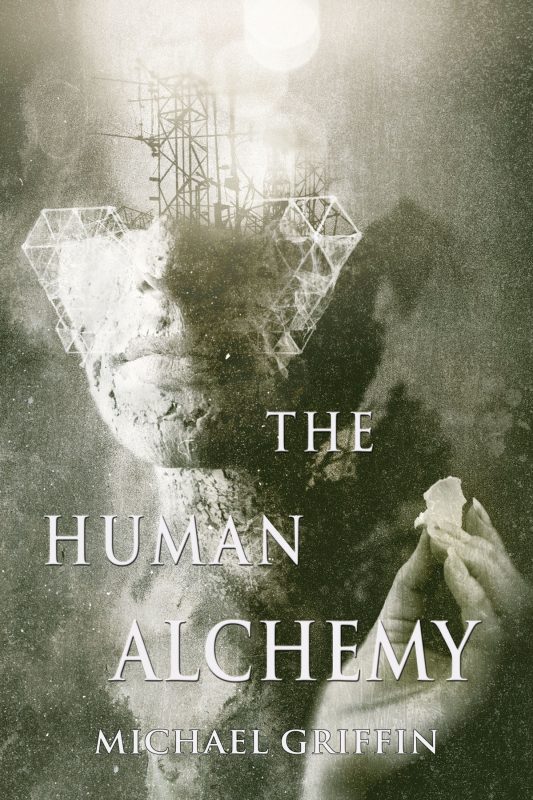 Michael Griffin’s second collection of short fiction, The Human Alchemy, collects eleven previously published stories and one original tale. Included is a reprint of Griffin’s novella An Ideal Retreat, originally published as a stand-alone chapbook by Dim Shores. In these stories, Griffin further displays the wonderful prose, insight into character, and expansive imagination that made his debut collection The Lure of Devouring Light (2016) so exciting. Some readers, however, may find that the stories collected in The Human Alchemy share enough overlapping elements that, taken together all at once, their impact is reduced.

Alchemy is an apt metaphor for the processes at work in these twelve stories. Across these tales, human beings are but one variable in complex systems of arcane math and alien formulae that run on through the cosmos and shadows around them. Griffin has a gift for tapping into his characters’ dread and somnambulistic malaise as they wander across desolate Oregon beaches or haunt marvelously unsettling compounds, chalets, and retreats, but often these humans are small and isolated things moving around like flecks against the backdrops of these intelligently designed geometries that they could not comprehend even if they could fully see. Often, it seems, it is not the humans that are the active agents in these equations, but rather that they exist as passenger substances to either be transformed into something pure or rendered inert. The stories here, then, for all their naturalistic settings and emotional landscapes exist in a kind of intimate remove. At their best, they capture an otherworldly chill at the uncanny gulf between our world and the Mystery beyond.

In these stories, originally published over the period between 2014 and the present, Griffin continues to demonstrate his impeccable prose craftsmanship. Always lucid and evocative, Griffin operates in different modes – lyrical, fantastic, concrete, or realistic – as the stories warrant. In particular he displays a great aptitude in his descriptions of the sensuous and sensual world – his descriptions of the pleasures of food, drink, and beauty are wonderfully lush, while the physical houses, castles, and vacation homes that he builds range from banal to opulent, but are always clear and grounded. When explanations turn to the metaphysical or cosmological, they retain both lucidity and mystery. Sentence for sentence, Griffin is one of the best contemporary writers of the Weird.

While Griffin draws much from his home state and continues to create an impressive psychogeographical atlas of an alternate “Weird Oregon,” in The Human Alchemy that place seems to be primarily inhabited by variations on the same character. All but two protagonists are male, and almost every one is romantically unencumbered, financially comfortable, sensitive of passions, and artistically inclined. While Griffin does an excellent job delving into his characters to provide layers of biographical and psychological detail as he fleshes out their internal malaise or existential angst, the characters seem to haunt these stories more than drive them. The few instances of outward variation – female protagonists in “An Ideal Retreat” and “The Human Alchemy,” a parent-child relationship in “Madness Sings at the Maelstrom Window” – feel like the exciting exceptions that prove the rule.

Within these parameters, most of the stories operate firmly within the classical structure of the quiet and literary Weird. They tend towards psychological portraits of sensitive individuals undergoing a slow-building frisson between a recognizable world and the hints of something different, usually culminating in either a nebulous event or an explanation of the universe’s mysteries from a font of occult knowledge. As a result, like elements in an alchemical formula, characters tend to be acted upon along by exterior circumstances until they either quietly transmute or do not. However, in those stories featuring characters driven by quantifiable external goals, such as in “The Only Way Out is Down” – where the protagonist’s simple desire to fix a leak before he sells his home kicks off a strange reckoning with the hollowness of his suburban existence – the effect is positively propulsive.

While certain similarities are more easily overlooked when spread out across various anthologies over the years, seeing them all together highlights their similarities. In the future, it will be exciting to see how Griffin continues to turn his considerable skills in new and different directions. All of which is to say that these are quiet, at times unsettling, stories but that experiencing the same notes across multiple entries in a single volume may dilute their effect. Readers can see take as variation on a theme, but it’s probably not coincidental that the stories that most break from this mold – such as “Ideal Retreat,” “The Human Alchemy,” and the “The Only Way Out is Down” – are among the most recently published.

Still, there is much to enjoy about this collection and it further cements Michael Griffin as one of the preeminent voices in the current Weird milieu. To this reviewer, The Human Alchemy ends on its highest note with the title story, wherein a young bartender joins two eccentric surgeons in their mountain castle for what she at first assumes is a romantic escapade. As our protagonist learns, however, they have grander designs, and Griffin allows the speculative element to grow and breathe and change, taking it just inside the doorstep of transcendence, rather than squinting at it in the distance. This is the kind of bold exploration that hopefully Griffin’s further work will explore.