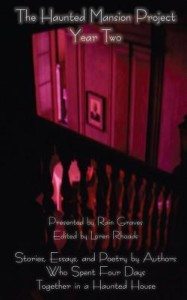 Unaware of this ongoing project, I missed the first volume. Subtitled Stories, Essays, and Poetry by Authors Who Spent Four Days Together in a Haunted House, Year Two is just that. And more.

The eponymous mansion (address kept private, but somewhere—I’m guessing—in Marin County, CA) is also the subject of paranormal investigation, one with serious intent. As both a writer of horror fiction and author of a forthcoming nonfiction book exploring mysterious phenomena, my interest was piqued even more.

In short, the autumn 2012 excursion gathered 17 horror writers and artists in the manse over four days. Each documented via short stories, vignettes, poems, and straight journalistic-type writing their impressions, creating what (at least in my mind) amounts to individual psychological profiles reflected from the mansion’s (and surrounding landscape’s) Rorschachian presence. I’d be lying if I claimed to not be envious of this cross-section of people—some known to me, some not.

The fiction and poetry is both fascinating and uneven, due undoubtedly to the short time allotted for creative activity. Notable, affecting work is from Kay Sundstrom, Rena Mason, Kim Richards, Sephera Giron, Rain Graves, Angel Leigh McCoy, and Stacey Graham. I’m guessing they had a ball writing these pieces while under the mansion’s brooding influence, and the gravity of its history.

The investigatory arm of the group (as in 2010) is represented by Nichole Boscia, Kristin Galvin, and Diane Nesom, known collectively as the GhostGirls. Founder and lead investigator Boscia’s “The GhostGirls Investigation Report: Year Two” is academically organized, yet not dry, and gives the reader a glimpse into paranormal investigation: the science and instruments involved, how this works, and how (to the extent any can be) data are interpreted. It’s obvious that Boscia (a NASA employee) “gets” her primary goal: not to foster or debunk mystery—but work to solve it.

The hazards of high-tech methods are many. EMF meters can be triggered by faulty house-wiring, microwaves, solar activity, and—most often overlooked—being held in the hand. Some objects that are inadvertently magnetized, such as metal bed-frames, can also give a “false” reading. Despite these and other potential false flags, the GhostGirls (sometimes assisted by various writers and artists) do manage to collect undeniable intel. Electronic Voice Phenomenon, with which I’ve had personal experience, is slippery too. The question isn’t: “Are anomalous voices being recorded?”, but “What is their source?”

The book has a good number of photos, including a few of active investigation.

Presenter Rain Graves has an Afterword, wherein the reader learns of various difficulties setting up both the 2010 and 2012 visits, as well as furthur reflections on the hauntings. The end-matter features photos of each Haunted Mansion Survivor, as well as brief bios.

More information can be had at http://hauntedmansionwriters.blogspot.com/