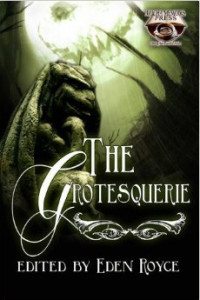 Contrary to popular belief, women can write horror. And you know what? They’re pretty darn good at it, too.

Such proof exists in The Grotesquerie, an anthology comprised of twenty-two uniquely twisted tales from the dark and macabre minds of a select group of horror authors who just so happen to be women.

Released as an homage to female horror writers in celebration of February’s Women in Horror Month, the collection is a delightfully bloody smorgasbord of terror; every helping is a unique experience that delves deep into the many sub-genres that exist in the wonderful world of horror and, just as the title of the anthology suggests, there is no lack of the grotesque within its 300 or so pages. From the strong opening tale by Michele Garber entitled Vegan (best described as: you are what you eat) to the final dance, Cryptomycology by Vivian Caethe (worst trip ever!), to everything (and I mean everything) in between, The Grotesquerie captivates as much as it chills you to the bone.

Although Vegan and Cryptomycology are strong pieces to open and close with, the real fun lies within. A few standouts include Lisamarie Lamb’s Devil’s Cake, a delicious tale about adultery; Marianne Halbert’s Papa’s Wrench and the Wind Chime, a personal favorite in the bunch that centers around a young girl and odd and ever-growing family; Nicole DeGennaro’s The River, a thoughtful piece about a friend’s passing and the burden that follows; Evelyn Deshane’s Baby Eyes, a short-but-sweet story about a little girl who has legitimate questions for her parents after losing her baby teeth; and Kierce Sevren’s Beyond the Torii, a tale about one mother’s desperation to save her daughter.

Every author within the anthology has a voice that’s all their own, which makes for a great read. The stories are precise; the writers know exactly where they want to take the reader in the brief pages they have available and waste no time in doing so. Although some stories touch on similar subject matter (a couple of bad trips, a few apocalypses), every story is different and some of them take quite the uncommon road to reach their epic conclusions.

It should be fairly obvious to anyone who doesn’t live under a rock that women are severely underrepresented in the horror genre; editor Eden Royce makes note of the same in her opening remarks of the anthology. It’s easy to get wrapped up in a widely discussed topic such as this, but at the end of the day, someone’s gender is completely irrelevant to their ability to tell a story that makes you want to sleep with the lights on. So kudos to you, ladies of The Grotesquerie; the lights will be on in my house for a while.