The Girl with All the Gifts – Book Review 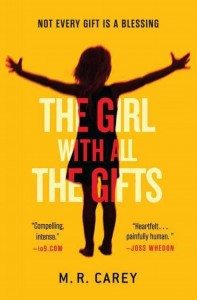 If you’re going to write a zombie novel in 2014, you have to give readers something truly new because by this point, if someone is interested in reading a story about zombies, they’ve undoubtedly read all the usual approaches by now.  I am happy to say that M. R. Carey has indeed given us a fresh look at zombies in THE GIRL WITH ALL THE GIFTS.  I’m not going to beat around the bush as some other reviews have and pretend that this is something other than a zombie novel.  That’s not a spoiler, simply read the back cover blurbs and you’ll know just what you’re in for.  I’d also like to clarify that while this book is credited to “M. R. Carey,” it is written by Mike Carey, prolific author of the Felix Castor supernatural detective series as well as the Lucifer comic/graphic novel series (a spin-off of Neil Gaiman’s Sandman).  Carey’s got a great reputation as a wordsmith and world-builder, so I’m not sure why the publisher has resorted to initials here.

Some mild plot spoilers follow, though I promise not to ruin the book for you.

Melanie is a very smart, precocious girl forcibly enrolled in a special school that is as much a maximum-security prison as it is a place of learning.  The world outside the school is a post-apocalyptic Britain, with the survivors trying desperately to find a cure for the disease that has brought down civilization.  I don’t want to say too much about the nature of the disease that brought down civilization, except to say that it is interesting and nuanced, and provides good scope for the story.  Again, I don’t want to offer too many spoilers, but Melanie, her favorite teacher, and a couple soldiers are forced to leave the fragile outpost of a heavily militarized civilization in which they have been living and travel through a ruined Britain, giving the reader the opportunity to learn what’s going on along with the protagonists.

The zombies of THE GIRL WITH ALL THE GIFTS offer a nice, logical mix of shamblers, sprinters, and more enigmatic sorts, making their nature unpredictable and part of the novel’s mystery for unraveling.  I was also pleasantly reminded of David Gerrold’s excellent (though still uncompleted after all these years) War Against the Chtorr series in which an alien – and highly lethal – ecosystem is gradually replacing our own.

Carey’s writing is very clear and eminently readable; this was the longest piece of fiction I’ve read by Carey (I’ve loved several of his stories collected in various anthologies) and his prose remains as fine as ever.  Characterization, dialogue, plot, and action sequences are all very well done.  I am happy to say that action and combat are strengths for Carey.

I can’t quite decide if THE GIRL WITH ALL THE GIFTS is a young adult novel or not, or if that’s even a meaningful genre distinction (aren’t YA novels mainly read by adults anyway?), and frankly, it doesn’t matter either way.  This was a very fast, enjoyable read.  Hard to put down.  Highly recommended.