The Boy on the Bridge – Book Review 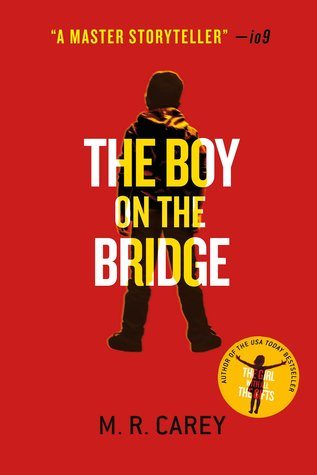 I should mention I have not read M. R. Carey’s previous novel The Girl with All the Gifts. I did see the movie and those who have read the novel tell me it was fairly faithful to the book. This is important since The Boy on the Bridge takes place in the same universe as the previous book and is a sort of prequel. The tale takes place twenty years before the events of the earlier book and ten years after the start of the apocalypse that envelopes the earth but I am getting a little ahead of my review. Most important for now is that The Boy on the Bridge can easily be read as a standalone. Yet those who have read The Girl with all the Gifts will have some knowledge that will add to the enjoyment as you connect the action of this second book with what transpired in the first book.

But it is essential to have a basic understanding of Carey’s post-apocalyptic world as one begins to unravel the details of this current work. Earth has experienced a devastating plague in the form of a fungus that attaches itself to the human host and very quickly takes control of the brain. I am told the author developed this idea from an actual parasite that exists in insects. The infected are called Hungries and operate in an almost vegetative stage until they sense their prey, which is pretty much any living and moving thing then attacks and devours it. What is left of the human race on the British Isles is situated in a fortress called The Beacon and a few scavengers on the outside called Junkers. In a desperate attempt to retrieve any knowledge that made lead to a cure, and to search for a previous vehicle sent out and never returned a few years earlier, a crew of twelve evenly divided between soldiers and scientists board a large vehicle they call Rosie and head north toward Scotland.

What they find and how it will turn everything they know on its head is the crux of the book. Those who have read Carey’s previous book or seen the film will have a good idea of what that might be. But for me it is not so much the goal and their discoveries that make this novel so fascinating but the interaction of the crew with each other and especially two passengers, Epidemiologist Samrina Khan and a young boy named Stephen Greaves whose purpose on the journey is not known by the crew except for Khan. Stephen is a savant with distinctive autistic traits. He is an odd genius whose discovery of “blockers” allow the crew to walk undetected by the Hungries. Khan thinks he may become the catalyst to discovering a cure while the others see him as indecipherable, childish, and weird. Khan herself is pregnant, something that is viewed as subordinate and unfortunate by Dr. Alan Fournier and Colonel Isaac Carlisle, the civilian and military commanders of the expedition. Stephen’s poor communication skills and his fear of exposing his discoveries due to how they might be perceived becomes a significant issue of tension throughout the novel.

The author does an incredible job of presenting the claustrophobic environment of the vehicle and the emotional tension that it creates in the twelve passengers. The split between scientific and military personnel creates its own conflict in mission but each member brings their own baggage. In fact, the perceptive reader can see the tiny society in Rosie as a capsule of class conflict in a bigger society. This is what I see as the strength of the book, melding these conflicts into the more science fiction experience that is the bulk of the novel. What each person sees as their priority become their reason for their behavior and doubly so for Stephen who is unable to play the hypocritical games of adults and, as a form of protection, drifts into isolation. Dr. Fournier isn’t all that different from Stephen except he has enough of what we call “maturity” to disguise his ulterior motives. Khan often finds herself the mediator between Stephen and the crew, sometimes needing to excuse his odd and sometimes dangerous actions. However she is caught up in her own dilemmas as her child nears the point of delivery.

Then there are the Hungries. Carey created a satisfactorily different form of zombie. They are not zombies as much as diseased, and it is that disease and how it develops that moves much of the plot. The action between the crew of Rosie and the Hungries becomes more complex as other players in the apocalypse arrive. All of this leads to hope for a cure and, soon afterwards, fears on whether that cure is worth what must be done. Place into that the expected power plays of members of the expeditions and their superiors at The Beacon, and you have a novel of much action and complexity. The author excels at both narratives of action and the most psychological aspects of survival in the apocalypse and he rarely lets us down in the excitement of either.

The best way to describe The Boy on the Bridge is that it is a rush of both visceral and psychological proportion. It moves on both levels consistently to what I can only describe as a very satisfactory ending that brings together both books yet treats them as their own stories. As said before, while it is a standalone novel and should be enjoyed immensely by those who are not familiar with the previous book or film, it is probably best to read them in order. The one thing I can state for certain is The Boy on the Bridge will be an intense and rewarding experience.