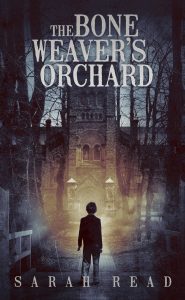 Plot: He’s run away home. That’s what they say every time one of Charley Winslow’s friends vanishes from The Old Cross School for Boys.

It’s just a tall tale. That’s what they tell Charley when he sees the ragged grey figure stalking the abbey halls at night.

When Charley follows his pet insects to a pool of blood behind a false wall, he could run and let those stones bury their secrets. He could assimilate, focus on his studies, and wait for his father to send for him. Or he could walk the dark tunnels of the school’s heart, scour its abandoned passages, and pick at the scab of a family’s legacy of madness and murder.

With the help of Sam Forster, the school’s gardener, and Matron Grace, the staff nurse, Charley unravels Old Cross’ history and exposes a scandal stretching back to when the school was a home with a noble family and a dark secret—a secret that still haunts its halls with scraping steps, twisting its bones into a new generation of nightmares.

Review: Gothic horror is probably my favorite kind. I cut my teeth on it, watching black and white Hammer films with my mother and grandmother on Sunday afternoons. They were often set in rural areas of Northern England, against a backdrop of mist-covered moors, ancient castle ruins, and tight-lipped villagers.

Those films were engrossing for me, and perhaps that is why I loved reading The Bone Weaver’s Orchard. Sarah Read’s appreciation for the area – North Yorkshire – and the time period – the late nineteen twenties – is evident in her style and her description of settings. In an area of the world that can be seen as bleak in winter months, Read finds something vivid to describe.

The Bone Weaver’s Orchard is horror of the most lingering kind. A person, especially a child, alone without support or care. A person unfamiliar with the culture, locale, and mores of a place. Who can they trust? It’s a well-paced Gothic tale told with modern attitude, but with a firm respect for the traditions of the genre. Like most Gothic work, there is a gradual build to the dreadfulness within, but the eeriness and unsettling tone are here from the first page.

Charley’s love of insects features heavily in the novel, and is a great mirror for how the characters will treat him throughout the book. From early scenes of Charley bringing his beloved pets from Cairo and Algiers to Northern England, out of their usual desert environment into a cold, unforgiving climate, the foreshadowing of the treatment of those smaller and more delicate is in play. All too soon Charley realizes he too, is not made for this part of the world.

Something is dreadfully wrong at the Old Cross School for Boys, but knowing that from the outset doesn’t prepare you for the shock of what’s to come. How deeds from the past continue to corrupt the future. How innocence is so carelessly, and gleefully, destroyed while those in authority are so willing to look away or see what they want to.

Also in this novel are tenets widely held at the time this book is set, and Read handles these difficult subjects with sensitivity. Nationalism, racism, and the prevailing mindset of anything outside the borders of England is irrelevant, unnecessary, and without value. Charley’s teachers show this when telling him that his lived experience in various African countries where his father was stationed with the British military has no bearing on what is taught in the classroom. On several occasions, he is enthusiastically caned, a corporal punishment used in British private schools up until 1998. All of this adds to Charley’s isolation, and fear.

At times I find the Northern Yorkshire accent, associated with good old fashioned hard-working folk and common sense, can be difficult to penetrate for someone not from the area. Read has handled Sam Forster’s Broad Yorkshire accent skillfully and with tact, allowing the flavor of the accent to come through the words while maintaining clarity. I’m a strong believer in the use of dialect and it’s used to great effect here.

Adding to the bleakness are the instances of children’s cruelty to other children, topped off by adults not listening to the students’ fears. Even faced with all of these barriers to solving the mystery before him, Charley is undaunted. He is sure there is something dark and frightening going on and he is resolute in his pursuit of truth. The final conclusion of the novel is at once heartbreaking and astonishing.

Read has not been kind to her characters, instead choosing to show depravity alongside indifference, revealing how they conspire to create painful tragedies playing out in what we think are safe spaces.

Sarah Read’s The Bone Weaver’s Orchard is at times harrowing, at times tender, and in all its pages of crumbling ruin, secrets, and despair, an immensely worthy read.