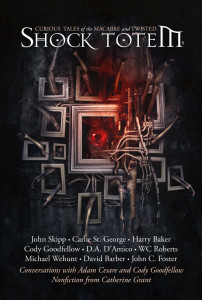 The good folks at SHOCK TOTEM magazine are up to their old tricks: K. Allen Wood – ST’s publisher and editor – and his team have produced another outstanding issue.  I honestly don’t know how they do it.  The fiction published in ST by authors old and new is consistently top-notch.  As with all issues of ST I’ve come across, #8 is filled with a mix of short horror fiction (eight stories and a poem by my count), interviews with authors, a couple of short non-fiction pieces, and some reviews, along with one of my particular favorite additions, authors’ notes on their stories.

Some highlights of the issue:

John C. Foster’s “Highballing through Gehenna”: A family is traveling across country by train, but this is a world that has been fundamentally transformed and the family is soon in a fight for their lives.  Amazing imagery in this story; I’d love to see Foster pen a novel in this setting.

Carlie St. George’s “We Share the Dark”: A woman who can see and communicate with ghosts struggles with what this does to her relationships with the living.  Mournful and melancholic, but feels very, very real.

Cody Goodfellow’s “The Barham Offramp Playhouse”: I’m an East Coast kind of guy, but I loved reading about the frankly horrifying lives of actors struggling to hit it big in Hollywood.

David Barber’s “Death and the Maiden”: A really chilling postscript to Frankenstein that gets you the more you think about it.

Harry Baker’s “Fat Betty”: Begins as a British heist story – those are always fun – but then horror seeps in.  Don’t steal from Fat Betty, kids.

John Skipp’s “Depresso the Clown”: I know it’s fashionable to pretend to be scared of clowns but I’ve always liked them.  That’s why I found Depresso’s fate that much more depressing.  Very dark tale of body horror.

There’s lots more in the issue, but those were the stand-out pieces for me.  Yet another great issue of SHOCK TOTEM.  Every fan of contemporary horror should be reading it.  Strongly recommended.